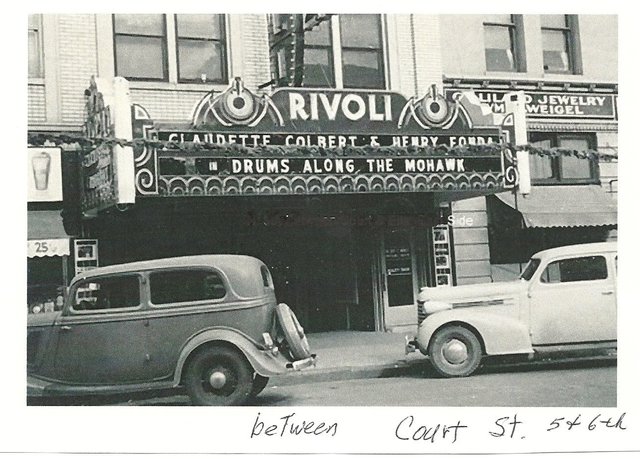 The Rivoli Theater opened October 5, 1926 with Red Grange in “One minute to Play”. It was equipped with a Kilgen organ which was opened by organist Iru Price. In 1930 it was remodeled in an Art Deco style. It was closed on January 16, 1949 with Montgomery Clift in “The Search”. It was converted into retail use.

An April 30, 2003, Daily Sun article about the recent restoration of the Rivoli building’s facade (link) said that the Rivoli Theatre had opened on September 27, 1926. The “opening” in the October 5, 1926 ad OCRon posted in the photo section must refer to the opening of the Red Grange movie, not the opening of the theater itself. The actual opening feature at the Rivoli was the Constance Talmadge movie The Duchess of Buffalo.

The Busboom Brothers designed and built the new Rivoli Theatre. It was scheduled to open on September 27, 1926 with Constance Talmadge in “The Duchess of Buffalo.” That screening was shuffled off to the Gilbert Theatre when the Rivoli equipment did not arrive in time. The Rivoli’s grand opening took place on October 5, 1926 with Red Grange in “One Minute to Play.” Iru Price was at the Kilgen Organ at opening but Eddie Borgens moved from the Garrick Theatre in Minneapolis to play the Kilgen Organ beginning in 1927. In October of 1928, the Rivoli went with Vitaphone to become the fourth theatre in the state with sound (supposedly).

The theatre was refurbished in 1930 for a new deco look and received improved sound in a 1934 refresh complete with air conditioning. In 1948, the Pix Theatre was refurbished becoming home to the “new” Rivoli which was changed at the 11th hour to the Fox Theatre. The last film at the Rivoli was Montgomery Clift in “The Search.” The former Rivoli was transformed to a Hested’s retail store.