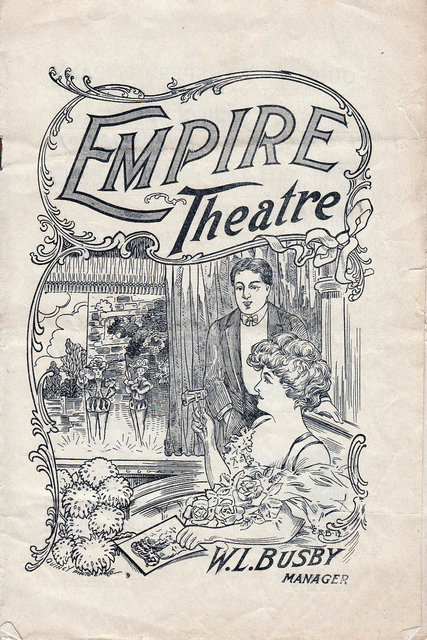 The Empire Theatre opened in 1893 at 8th Street and Maine Street. On August 25, 1913 it was renamed Hippodrome Theatre and by January 1915 it was the Hippodrome-Empire Theatre. It reverted back to its original Empire Theatre name by 1921. It was closed in 1926. The building has been converted into apartments.

if you use the street view and look at 115 north 8th you can see an arch above the front door, above that the metal connectors that held the sign to the building are visible when looking at it in person, the building at the North West corner of 8th and Maine was a Saloon and that building is still there also.

“The Empire Theater, at Quincy, has forsaken the dramatic field, it is reported, and will reopen August 25, as the Hippodrome, featuring vaudeville and moving pictures. All seats will be ten cents, seven days a week. It is announced that the highest class attractions have been booked in Quincy, but have not been profitable.”

Here is an early interior photo of the Empire Theater. The description, which does not mention the name change, says that the house closed in 1926.

The same source has an advertisement for the inaugural performance at the Empire Theatre, which took place on December 21, 1893.

This advertisement for a performance at the Empire Hippodrome Theatre dates from January, 1915.

Uploaded a 1946 exterior photo, the year it closed, and an interior photo from the Quincy Public Library collection.

Of all the old theaters in Quincy, it’s a shame that one of the survivors is this cloddishly-proportioned hulk.