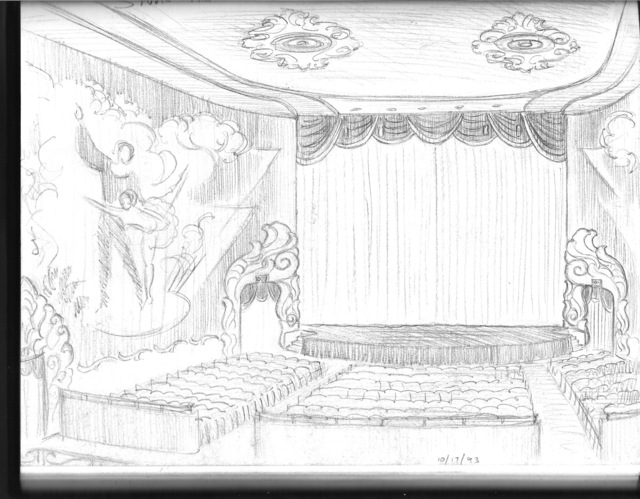 The Studio Theatre was the last movie theatre in the classic tradition to be built in downtown San Jose, opening in 1950. It maintained its status as a well-kept first run theatre into the 1970’s, when it switched to showing adult movies in 1973-1974. This was followed by a period screening Spanish language films.

When the market for such product dried up in the early-1990’s, the policy became standard Hollywood product double features at bargain prices. All this time, the Studio Theatre retained its original interior murals of ballet dancers, and its gold-swagged curtains and original box office and magenta-and-white neon.

In about 1999, the theater was converted to a nightclub called Dance Plex, containing a Seventies retro club, Polly Esther’s, and a 1980’s retro club, Culture Club. It was last used as Club Wet, which was closed in September 2009.

The interior has been altered, although the lobby has only been repainted. The exterior, which is landmarked, has been completely preserved, including the sign. The auditorium was stripped back to bare brick in August 2011, and will reopen as rock climbing venue.

Word reached me today via someone who owns a business nearby that Club WET is finis. Apparently an indoor rock climbing facility is taking the space. Supposedly the building has been rezoned so that it cannot be a nightclub again.

On site observation by me this morning: I was allowed to briefly step into the former auditorium. I can confirm firsthand that the auditorium has been completely gutted to the bare concrete and open beam steel ceiling joists. An extensive new steel armature for the rock climbing wall structure now twists and turns throughout the space, and is admittedly quite impressive. At present, the original wall surfaces and ceiling coves of the lobby and the passages leading to the former auditorium are intact. Original ornamental plaster leaves still are extant in the passages, but once in the auditorium, all trace of theatrical use is completely gone. The exterior at present remains completely unchanged from its days as WET, save for the removal of the club’s name from the former reader-board spaces on the marquee.

Just went into the Studio theatre a few days ago and they have torn out the old lobby walls. Will they wreck the nice front glass boxoffice also and front neon sign? What will the new name be ‘Studio Rocks Downtown’. In the old days people went outside to climb rocks for free, now you have to go indside and pay.

I remember going here to see TO SIR WITH LOVE… great movie, then once I went in there by mistake and fell in love Throurghly Modern Millie… fond memories… now it’s a ghost theater….

A couple of weeks ago I popped by again. Not to appear to contradict my friend Terry, but the lobby itself is still there, with its streamlined ceiling coves. What HAS been gutted out is the little “sunken” lounge behind where the concession counter was, which led to the restrooms.

Any interior pictures of the Studio?

I have never seen a single photo of the interior. The one time I went to a movie there in the early 90s, I asked if I could take pictures and was not granted permission (with today’s tiny digital cameras, I wouldn’t have bothered asking, just snapped away). So, Plan B. I had my sketchbook, and did a drawing on the spot before and after the movie. I’ve posted it under the Photos section on this Studio page. It is as accurate a representation I could do in the time allowed. I have a lot of experience drawing buildings, so you can count on this as a faithful representation of the essential look of the auditorium. Check it out!

Gary..Really like your drawing of the interior of the Studio. I bet at one time it was a great looking movie theater.

Glad you enjoyed it. Thanks.