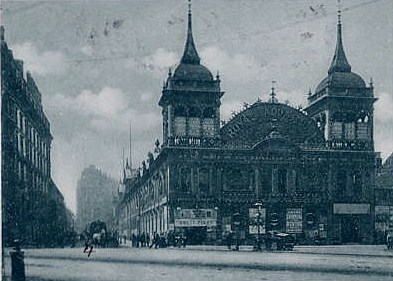 Located on the corner of Barking Road and Victoria Dock Road, opposite Canning Town station in east London. Opened in 1875 as Relf’s Music Hall, it later became the Royal Albert Music Hall. Rebuilt in 1909 as the Imperial Palace of Varieties to the plans of John Farmer, the building had been transferred brick by brick from the demolished 1,150-seat Royal Aquarium Theatre (later Imperial Theatre), Westminster which had been designed by Frank T. Verity in 1901, and had closed in 1908. It was screening films by 1912 and later became the Imperial Cinema. It burnt down on 16th March 1931.

Rebuilt in 1934 to the plans of architect Charles Brett, it was rebuilt in an Art Deco style to the plans of noted cinema architect George Coles and re-opened as the New Imperial Cinema on 15th May 1939 with Bing Crosby in "Paris Honeymoon" and Boris Karloff in "Son of Frankenstein". Well known comedian Sandy Powell made a personal apprearance, and organist Max Bruce opened the Wurlitzer 2Manual/5Rank organ, which had been transfered from the Tolmer Cinema, Kings Cross. The cinema had a fully equipped stage and four dressing rooms.

The New Imperial Cinema was taken over by the Newcastle-upon-Tyne based Essoldo Cinemas chain in January 1955 and re-named Essoldo. The Essoldo was closed on 22nd September 1963 with Brian Donlevy in "The Quatermass Experiment" and Boris Karloff in "The Black Room". It was converted into a bingo club, which operated for several years. In 1967 it was demolished to build the Canning Town flyover road.

I have loaded a picture of the Royal Aquarium Theatre that is mentioned in the Profile..