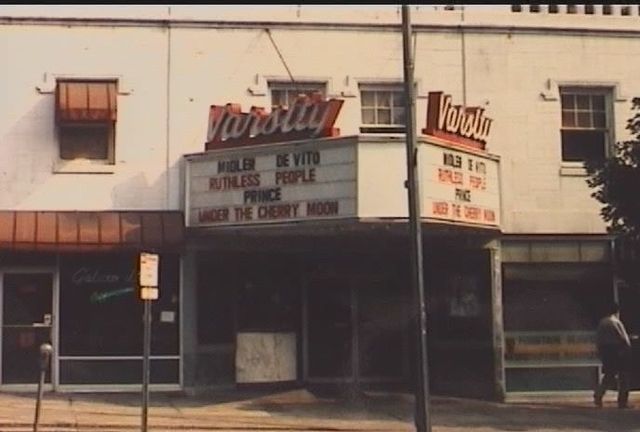 Opened as the Carolina Theatre on September 26, 1927, it had a seating capacity for 703, and a Robert-Morton theatre organ was installed. In later years it was operated by Paramount Pictures Inc. through their subsidiary H.F. Kincey. Wilby-Kincey built a New Carolina Theatre in 1942, and this theatre was renamed Village Theatre. On May 4, 1951 it became the Varsity Theatre.

“Extremely short in the front but when you get in you are lead down an illuminated hallway to a very dark theatre. Mind you she is looking rather dated in styling and décor, she more than compensates for running rare indie films and well just for being a classic old theatre.

Amazingly enough she is located on the next block and quarter mile down from the Carolina Theatre in Chapel Hill. Very cool indeed."

David Dymond: The small tunnel to the front theatre that was illminated with Tivoli lighting was done in 1982 when this theatre was split into two sections and was renamed THE VARSITY 1 & 2 under Greensboro/Burlington based Janus Theatres. From 1982 until 2009,this theatre was Chapel Hill’s only venue for first-run features as well as foreign and independent releases until it changed hands when it became an independent cinema that was owned and operated by Bruce H. Stone that shows second-run films and classic Hollywood releases..

From 1952 until 1982,the VARSITY was owned and operated under H.B. Meiselman-Eastern Federal Theatres.

It opened as the CAROLINA THEATRE in Downtown Chapel Hill under the Publix Theatres chain on September 23,1927 with the opening features “Cheating Cheaters”, and “The Way of All Flesh”.

On May 4,1951 the theatre was under new management and the name changed from the VILLAGE THEATRE to the VARSITY THEATRE. Under this new change upgraded additions were featured that included an expanded lobby section and a larger auditorium with super widescreen projection. By late-1954,more features were added to the VARSITY including the latest stereophonic sound and was equipped to show films in Cinema Scope projection. This theatre was owner and operated under H.B. Meiselmen/Eastern Federal Corporation from 1951 until 1982 as a single screener with 703 seats.

By November of 1982,the theatre underwent another renovation with the original auditorium of 703 seats were split into two sections and renamed the VARSITY 1 & 2 under Burlington/Greensboro, NC based Janus Theatres. Auditorium 1 seated 350. Auditorium 2 seated 205,bringing the total seating capacity to 555 seats. The theatre also changed formats from showing first-run movies to showing independent and foreign releases where it remained from 1982 until 2009.

the comments that ray revised here need to be posted for this theatre on the cinema treasures site.

ray must be a walking encyclopedia of Chapel Hill movie theatres.

Downtown Chapel Hill’s landmark since 1927 is about to close it doors without it’s support. Go Digital or Go Dark Campaign……

See article about this landmark theatre…….

It was shown first-run as a specially selective engagement presentation at Christmas of 1967 when the film was a general release.

This theatre also got a lot of the Disney releases too. Some first-run showings. Among the most successful that brought in capacity crowds was the VARSITY’S first-run showing of MARY POPPINS.

Varsity showed Rocky Horror Picture Show for a couple of years as a weekend late show. For a time, X rated fare was offered as a late show. Police presence was hired for showing of Pacino vehicle “Cruising” when the theater was warned that the gay community would trash the place if it was shown. Turned out there was a much bigger mess from Rocky Horror toast/water/rice throwing crowd. : )

This opened as the Carolina Theatre on September 26th, 1927 and was renamed Varsity on May 4th, 1951. Grand opening ads posted.