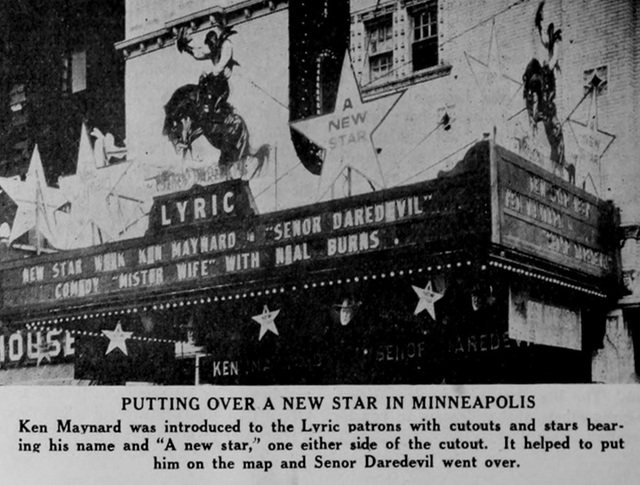 The unusually-named Blue Mouse Theatre opened in 1920 after more than a year of construction at a cost of around a quarter million dollars. This downtown Minneapolis house could seat around 1,500 in its elegantly decorated auditorium and contained a marble staircase in its lobby.

Its façade was decorated in white terra-cotta done in a Neo-Gothic style, and rose a full three stories over Hennepin Avenue.

Following a takeover by the Finkelstein & Ruben chain, it was renamed the Lyric Theatre on June 23, 1923, after an older theatre of the same name directly across the street from the Blue Mouse Theatre had closed.

For most of its existence, the Lyric Theatre was a second-run house, playing films after they had had long runs as the larger houses like the Minnesota Theatre or the State Theatre, just up the street.

In the late-1950’s, the Lyric Theatre started to play roadshow films, with reserved seating, starting with the epic “The Ten Commandments” in 1957. This film, and a handful of others afterwards, would have decent runs, but only mediocre grosses compared to many other roadshow houses in the Twin Cities.

By the 1960’s, it went back to second-run films. In January 1971, the Lyric Theatre closed with John Wayne in “Rio Lobo”. Not long afterwards it was demolished to make way for a new cinema, the Lyric Twin, which, just before opening, was renamed the Skyway 1 & 2.

I worked at the Skyway Theater from 1974-76 as an usher. I remember hearing about the Lyric Theater from a couple of older concession ladies who had worked there also. It’d be cool to see more pictures of the Lyric.

An item in the September 13, 1919, issue of The American Contractor said that a new moving picture theater was to be built on Hennepin Avenue between 7th and 8th Streets in Minneapolis for the Blue Mouse Theater Corporation. The surprising thing is that the theater was being designed not by one of the well-known theater architects in the Great Lakes area, but by Harry Lawrie, whose office was in Omaha. Though Lawrie’s firm, Fisher & Lawrie (dissolved in 1913,) apparently designed the original Creighton Theatre in Omaha, and he drew plans for an Omaha house called the Princess Theatre in 1916, he was not known as a theater architect.

Part of the Shubert properties.

“Opened in 1885 as the Hennepin Theatre for live performances, the theater became known as the Lyceum in 1905 and was remodeled and renamed the Lyric in 1908. Three years later, in September 1911, Roxy reopened the Lyric for the season, hoping to replicate the Alhambra’s success with film rather than dramatic plays.

Minneapolis would not succumb as easily (to motion pictures) as had Milwaukee. Motion pictures had already offended local reformers, while the city’s legislators looked upon movie theaters as dangerous fire hazards—or worse. “Everyone was antagonistic to pictures,” Roxy would later recall of his early days in Minneapolis, including the clergy, police, merchants, and the city’s educators…

For its reopening on September 18, 1911, Roxy installed a $2,500 pipe organ, a concert grand piano, and the all-women Fadette Orchestra of Boston. He also presented a variety of soloists along with the newly formed Lyric Quartet.251 The opening bill featured the films Sight Seeing in Boston, The Voyageur, The Ruling Passion, Captain Kate, and The Runaway Leopard (ca. 1911).252 All of this was provided for a ticket price of between 10 and 20 cents at the 1,700-seat theater—roughly the same cost as the city’s cheaper nickel and dime houses and dramatically lower than the Lyric’s prices when operated as a legitimate theater.253 Roxy’s new staff included footmen, pages, matrons, and female ushers who courteously assisted all patrons during the four daily hour-and-a-half shows.254 Roxy refurbished the Lyric Theatre as well, elaborately decorating the stage and screen. And with uneven projection in theaters across the city (and throughout the country), the Lyric’s daylight pictures were now intended to encourage repeat attendance, attract women, and boost perceptions. Elsewhere, palms, flowers, and an electric fountain prominently graced the entryway."

Itswagon — I believe your quote applies to the original Lyric theatre (http://cinematreasures.org/theaters/7210), which was across the street from this namesake.

Around 1952, the Lyric Theatre got a new front in the modern style. Before and after photos can be seen on this page of Boxoffice for June 7, 1952.

The Lyric’s function through most of its life was as a move-over house. Calling it “second run” is not the best terminology to use. It was a move-over house for the larger Minnesota Amusement/Paramount Theatres. The Lyric’s first runs in the 40s and 50s were often lower-studio/B type of pictures. Otherwise it was a move-over house for the Radio City, State, Century theatres. By the 1960s, the State and the Lyric were the only Paramount houses left in the downtown, so the Lyric started playing more first runs of major pictures then. The Radio City closed in 1958 and the Century in 1964. Paramount had given up most of its neighborhood theatres by the end of the 50s to early 60s. The Lyric closed in January 1971 with the first run of “Rio Lobo” which was a Christmas release.

The papers of the Minneapolis architectural firm Kees & Colburn, part of the Northwest Architectural Archives at the Elmer Anderson Library of the University of Minnesota, include a set of blueprints for the Blue Mouse Theatre, dated 1920. I don’t know if Kees & Colburn had any hand in designing the house, or if the firm just acted as supervising architects for the out-of-town designer, Harry Lawrie. I do know that Kees & Colburn’s style tended toward Classical/Beaux Arts rather than the Gothic look of the Blue Mouse.

Just posted a 1944 nighttime picture showing the Lyric just up the street from the Gopher. The Pix and State appear further up the block.