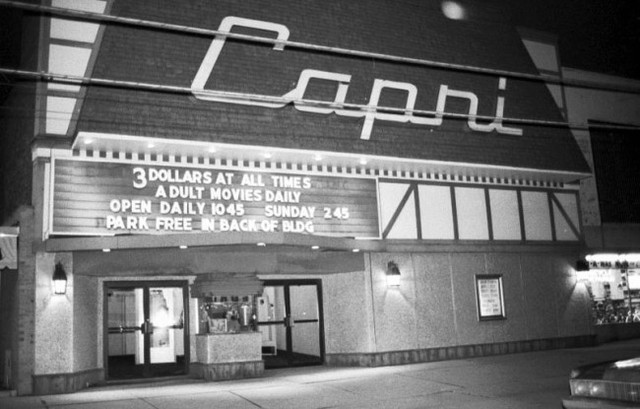 Originally opened as the East Detroit Theater on November 27, 1935. It was in Eastpointe, which used to be East Detroit.

It was later renamed Capri Theater from October 8, 1965 and was descibed as an art theater. It later became an ‘adults only’ theater. A 1975 photo of the theater can be seen below.

The East Detroit Theatre opened Wednesday, November 27, 1935, as announced in Boxoffice of November 30. The 700-seat house was independently operated by Jeff Williams, who also operated the Roseville Theatre in the nearby town of that name.

Boxoffice called the design of the theater, done by the Dearborn firm of Bennett & Straight, “modernistic.” Most of that firm’s early to middle 1930s designs for neighborhood theaters of this size were what could be called a budget Art Deco.

Unfortunately, the only photo I can find (at Water Winter Wonderland) was taken after a later remodeling that gave the front a 1960’s-style fake mansard. But I guess it’s the sort of thing you’d expect in a town that would rename itself Eastpointe.

Opened with “Bambole!” and “Madame”.