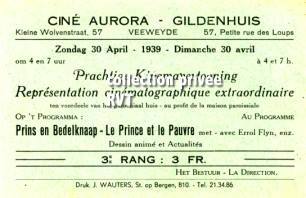 In the district of Anderlecht, there were 10 cinemas, Erasme, Vaillance, Metro, Kursaal, Monaco, Nova, Rio, Prince, Excelsior and the Winston.

Located in the suburb de Rad, not far from the Rio Cinema on Chaussee de Mons, this cinema belonged to a Catholic association and showed films from late-1920’s. First called Aurora Cinema it was re-named Winston Cinema after World War II, as a tribute to Sir Winston Churchill. The auditorium was in a separate building set at an angle behind the main street entrance building.

It was a family cinema open all week and children were always admitted. “Forbidden Planet” was a popular film shown in 1958. The Winston Cinema was closed in 1962. It now operates as a Catholic community club.