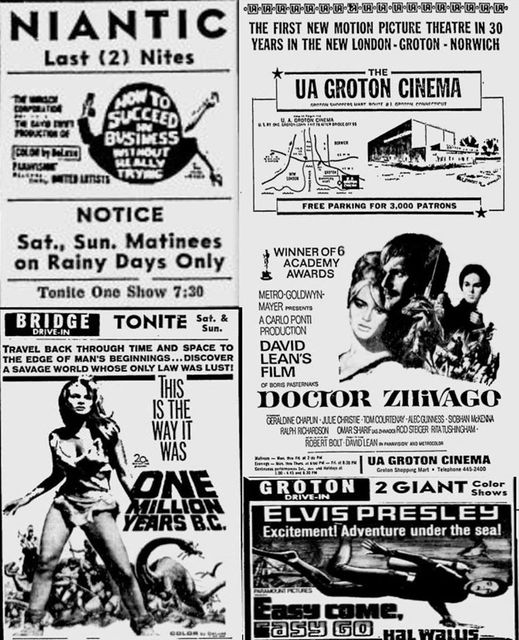 Located in the Groton Shopper’s Mart on US 1, this theater opened in April 1967. The theater was equipped with a Cinerama D-150 screen.

The August 8, 1977 issue of Box Office has an advertisement from Woodbay Construction Corporation entitled "To Twin or Not to Twin?". One could assume the theater was split up around that time. The theater ended with six screens, closing in August 2015.

Opened at the end of April 1967 (opening day ad just uploaded), advertised the first new movie theater to open in the area for the previous 30 years. 10 years later, the Groton UA would become the southern CT home of the Rocky Horror Picture Show on weekend evenings.

This cinema closed in August 2015.

I worked at this theatre when I was in High School in the early 80’s. As well as being there being a regular midnight showing of Rocky Horror on FRI & SAT, it also regularly played Led Zeppelin The Song Remains The Same & Pink Floyd The Wall @ Midnights on FRI & SAT. Then at my urging the mgr ordered THE GRATEFUL DEAD movie. At the time nobody really knew what they were. I promised her this would be a success and pleaded for her to book it for one weekend. CONN COLLEGE in New London had a Dead Show of course and it was mentioned on air as well as being in the paper…word got out through Deadhead circles and the place was near sold out 200-300 seats. The manager was shocked and pleased and thanked me. She overlooked all the pot smoke and held it over for another weekend! I started as an usher and later became a projectionist. I later returned as a projectionist in my college years. Marion Van Wagner was the manager. A sweet, tiny lady under 5 feet tall who was an area theatre manager for 50 yrs managing UA in Groton, Garde Theatre ion New London and Hoyt’s in Dayville and a theatre in Norwich (cannot remember the name)