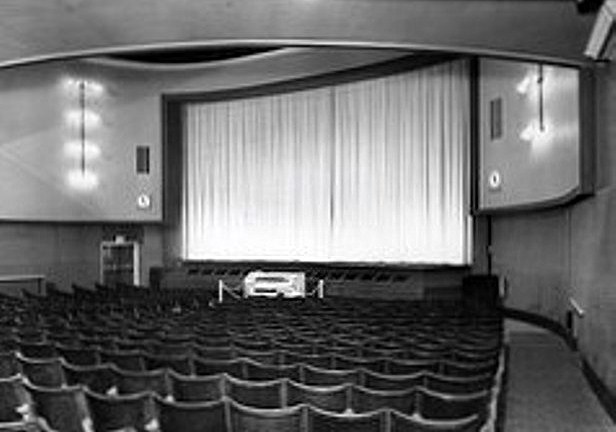 Located in the southeast London district of Catford. The Central Hall Picture House was opened on 23rd December 1913. Built for and operated by James Watt, it replaced his earlier Electric Picture Palace Theatre around the corner on Sangley Road, which was designed by the same architects as this new cinema; Edward Albert Stone, working with the architectural firm Norfolk & Pryor.

The Central Hall Picture House occupied a prominent corner postion on Central Parade at Sangley Road and Bromley Road. The imposing facade was in white stone and had two turrets on each side of the entrance. Inside, there was a small foyer and the auditorium had seating in stalls and circle levels. The ceiling was criss-crossed with beams creating deeply recessed panels.

It was re-named Plaza Cinema from 21st November 1932 and was taken over by the Union Cinemas chain from 1935. Taken over by Associated British Cinemas(ABC) from October 1937 they operated it profitably for several decades.

The Plaza Cinema closed on 27th May 1961 for an internal re-construction by architect C. ‘Jack’ Foster. It re-opened as the ABC on 26th November 1961 with Audrey Hepburn in "Breakfast at Tiffany’s". Closed for conversion into a twin-screen cinema on 10th October 1981, it re-opened on 20th December 1981 with "Superman II" starring Christopher Reeve in the 519 seat screen one in the former stalls, and "Midnight Express" starring Brad Davis and "McVicker" starring Roger Daltrey in the 259 seat screen two located in the former circle.

Taken over by the Cannon group in 1986, it was re-named Cannon. Later taken back in an ABC buy-out and re-named ABC again, it was closed in late-2001.

In 2002, it was purchased by the Brazilian based Universal Church of the Kingdom of God(UCKG), who also puchased the former Granada/EMD in Walthamstow, and who already operate the former Astoria Finsbury Park (also designed by Edward A. Stone). They were refused planning permission to convert the Granada/EMD Walthamstow into a church (in 2009, this is still being refused!) and the same situation happened at Catford in 2003, where locals wanted their cinema retained for film use.

A local campaign group was formed in 2004, and in the meantime, UCKG were preparing to invest 3-4 million pounds retoring the building. The case at Catford went to a Public Enquiry in 2005, which allowed the church to use the former stalls area, on the proviso they let out the former circle as a 200 seat cinema. In February 2006, planning permission was granted to allow UCKG to commence on their alterations for church use. In April 2007, the 200 seat ‘cinema’ in the former circle was advertised ‘To Let’, but in 2009, there have not been any operators taking up this offer and the space remains empty. Initially the church occupied the downstairs area and opened on 18th August 2007. In recent years they have used the upstairs area.

A set of vintage photographs of the Plaza/ABC:
View link
Photographed as the Universal Church of the Kingdom of God in April 2008:
http://www.flickr.com/photos/kayxh/2445692756/

Two more photos from 2007 here. I was allowed around the former cinema and the upstairs screen is indeed intact and contains much original plasterwork. Sadly I was not allowed to take pictures!

I was fortunate to work at ABC Catford in the mid 80’s have to say it was a wonderful place and the chief Mr Fisher was a wonderful and genuine man, many fond memories of ABC Catford. Of the Staff i remember Nancy folen the GM, Jean the Deputy who later went on to run the rising sun pub just up the road, Cathy, jean, eric. Its a shame it closed

Hi there I used to be a monitor in the early 60’s on saturday matinees,had great fun there…Angelo