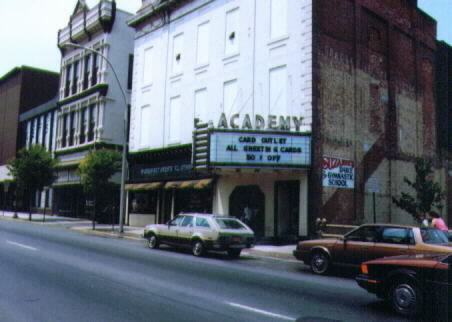 Located on Cumberland Street at N. Liberty Street. The 1,650-seat Academy of Music was opened in 1896. It was renovated and reopened as the New Academy Theatre on Devember 19, 1934 screening Francis Lederer in “The Pursuit of Happiness”. It reopened on May 1, 1946 as the Academy Theatre. The theatre was closed around 1982.

It has since been demolished and now has a new Lebanon Campus building on the old theatre site.

From the July, 1983, issue of Boxoffice Magazine: “Kenneth DeWees, owner of the 104-year-old Academy Theatre, in Lebanon, Pa., is giving community leaders an opportunity to raise funds to preserve the historic theatre building as a cultural arts center. He plans to demolish the movie house this summer if a buyer or user for it is not found.”

Apparently, Lebanon’s Academy of Music was a stop for the tours of many performers from the late 19th century at least into the 1920s. The Denishawn Dance Company gave an evening performance there on November 3, 1923. I’ve found one other references to a live performance at this theater, by a violinist named Hartman in 1906, but search engine results are, not surprisingly, dominated by references to the Academy of Music in Philadelphia, making it difficult to research the Lebanon house. One other reference I found in Boxoffice was trivial.

There’s this web page, though, with a brief paragraph about the Academy of Music, and a vintage photo of the stage as seen from the balcony. For a theater that lasted 104 years, there’s awfully little information about the Academy.

In that 1982 photo it looks as though the theater has already been converted to some other use. The entrance is no longer theater-like. While there was a 1975 French movie called “La Coupe,” I’m pretty sure there was never a film called “Fruit A Freeze” nor a second feature called “Frozen Fruit Bars.”

I came across one more Boxoffice reference to the Academy, in Harry Hart’s column of August 18, 1951, though the only information about the theater in it was that the then-manager of the house, William N. Hissner, had held that position since 1904, when it was still the Academy of Music.

I was on that tour in 1983, along with about 25 others with hopes of saving the theatre. Thats the only time I was inside. At that time it had some peeling paint and plaster and the balcony had been declared structurally unsafe, but it looked like a candidate for restoration. Not long after there was a major fire that destroyed all the buildings to the right in the 1982 photo. I believe the rear of the Acadamy was damaged in that fire. I’ll do a little more research for dates and post them later.
BTW, in the 1982 photo, the theatre is already closed. If you check the window on the left there is a store there by the name LaCoupe. I have no idea what they sold. Fruit A Freeze, I believe, was operating out of the theatre foyer. Sure is a horrible front they put on the building.

There shouldn’t be a period after theatre in the title.

This house was listed in the 1900-1901 edition of Julius Cahn’s Official Theatrical Guide as the Fisher Academy of Music, with a seating capacity of 1,650. The back wall of the stage was 40 feet from the footlights, and was 66 feet wide wall to wall, with a proscenium 33 feet wide. Quite a spacious theater for a town of 18,000.

LaCoupe was a hairstyling salon owned by John Feaser after the theatre closed, not a french movie. :–) 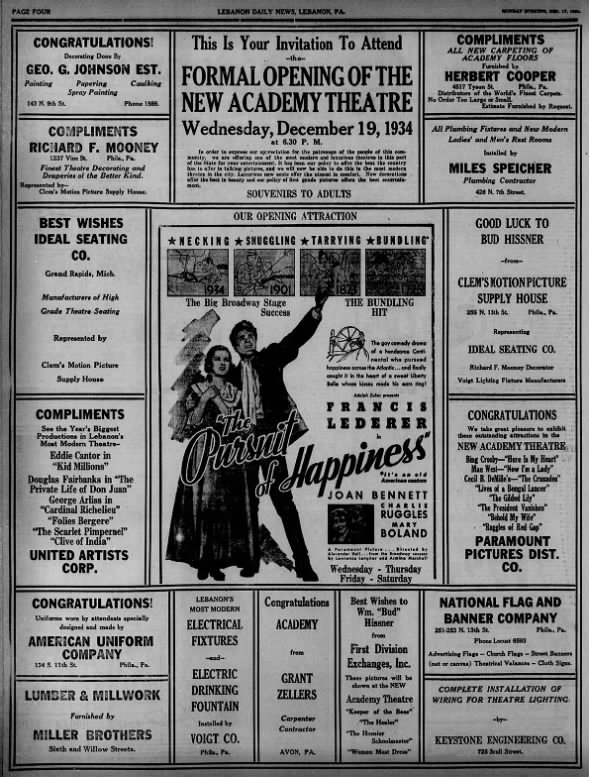