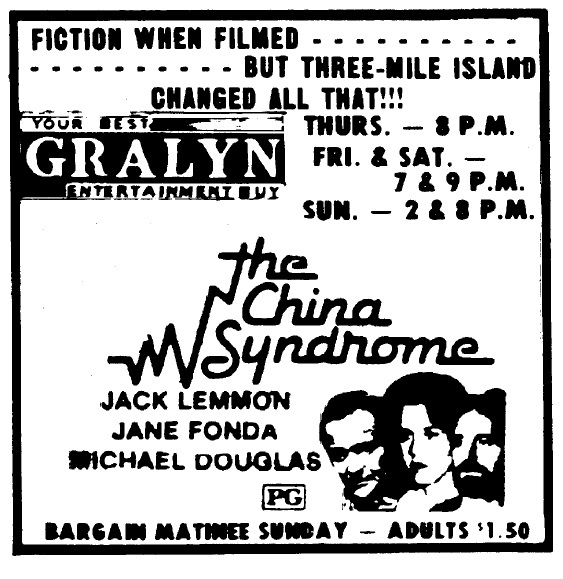 Looks empty in the Google Street View. No visible signs, anyway. FedEx van parked in front of it in the current view.

An article about the Gralyn Theatre starts on page 8 of the July, 1988, issue of The Quarterly, published by the St. Lawrence County Historical Association (PDF here.) It includes one 1988 photo of the front, and a few smaller photos of decorative details in the house. The Gralyn opened on January 30, 1920, and in 1922 was taken over by James Papayanakos, whose family controlled the theater for the next few decades. As of 1988 the theater was open only Friday through Sunday.

Here is another PDF, this one featuring a page from the November 3, 1999, issue of the Gouverneur Tribune Press. There are three photos of the theater, but not very well reproduced. Still, it’s possible to tell from a photo of the auditorium that it was considerably wider than the building that still stands at 119 E. Main Street.

The article says that the roof of the auditorium had partly collapsed the previous year, and that the deteriorating structure would probably soon be demolished. This must have taken place. The 1920 auditorium must have been added behind an existing store building, still standing, which became the theater entrance. It is rather narrow and looks like it dates from the 19th century. Google’s satellite view shows a grassy field behind the building and its neighbors, which would have been the site of the demolished auditorium.

This article about the Gralyn Theatre appeared in Exhibitors Herald of January 3, 1920:

“Special advices from its exchange office at Buffalo, N. Y. inform Fox Film Corporation that a contract has been closed with J. Claire Carpenter, who is building a beautiful motion picture theatre in the city of Gouverneur, N. Y.

“Mr. Carpenter plans to make his new house which will be called ‘The Gralyn,’ the last word in modern theatre design and construction, fitted with every possible comfort for his patrons. Work has started on the structure the last week in August, and according to reports of the contractors, the building will be ready for official opening on January 15 next.

“No definite decision has been made regarding the screen production which will be used to open The Gralyn, but among several big season successes now under consideration is the William Fox adaptation of Longfellow’s ‘Evangeline’ a classic of the screen. Present indications point to a decision in favor of ‘Evangeline’ and Fox’s Buffalo exchange is working with this in view. Mr. Carpenter, an enterprising showman who knows thoroughly the film field and its possibilities, has signed a contract covering the entire Fox output for the coming year.

“Judging from the plans of Mr. Carpenter, The Gralyn will put Gouverneur conspicuously on the film map. The owner has several distinctive ideas on operation of a combination stage and screen theatre. The film industry will look forward with interest to the progress of this exhibitor.”This web page from the Gouverneur Museum has a photo of the Gralyn Theatre’s projector, which is among the museuem’s holdings. The accompanying article says that the house closed in 1989 and was demolished in 2000. There is also a link to a 1981 photo of the house at American Classic Images.

Uploaded two photos from the Gouverneur Museum collection: the facade; the removal of the marquee when it became unsafe.