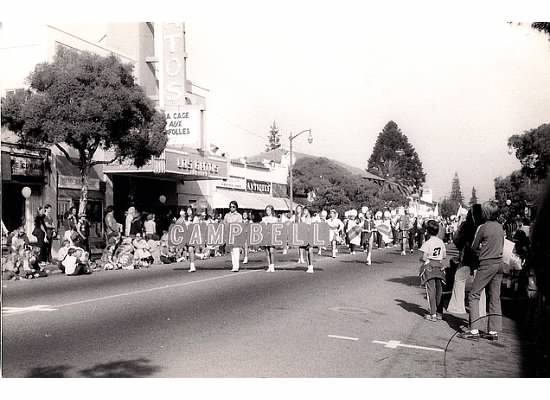 Located in Los Gatos, south of San Jose, CA. This theatre was originally opened in 1917 as the 400-seat Strand Theatre. It was designed and decorated in a combination of Arts and Crafts and Beaux-Arts style. Today, only the arched windows on the second story of the façade remain from that earlier look. It suffered a fire in 1929 and following a remodel it reopened as the Premier Theatre with 350-seats. It was renamed Blanco’s Los Gatos Theatre in the 1940’s and the seating capacity had been increased to 500-seats. Prior to the 1989 Loma Prieta earthquake, and a subsequent seismic retrofit and twinning, the auditorium sidewalls still had their original mouldings and cornices visible, though the proscenium had been given a Moderne reworking, flanked by Skouras-like maidens pouring urns.

With the early-1990’s strengthening and twinning of the theatre, it is only these maidens which remained to bear witness to the fact that you were indeed in an historic theatre–now Santa Clara County’s oldest full-time operating movie theatre.

The façade with its neon marquee and vertical sign is still a delight, and the theatre, though altered, is cozy.

The Los Gatos Theatre was closed in early-2013 for a complete refurbishment, and re-opened May 2, 2014.

That’s where the aka of Strand came from when they added the theater. Premier should also be added.

Regarding Joe Vogel’s assumption based on a 1974 comment made by William David in Box Office magazine: The Los Gatos was not twinned at that time. I attended there several times in 1989, and the auditorium was a single. The sidewalls had their original plasterwork—frames, moldings, medallions—from the Teens. There was a dropped ceiling of perforated acoustical tile, which was plainly hiding further ornament above it, as you could see some plaster pendant elements hanging down below the ceiling tile line on the sidewall pilasters. The proscenium and angled walls flanking it were of 1940s vintage, plain and streamlined, with the abovementioned maiden figures painted on them, these being the only historic interior decorative elements visible today.
The twinning was done after the Oct 1989 Loma Prieta earthquake closed the theatre for repairs and remodeling.

Closed. but will reopen in 2013 official web is at http://www.losgatostheater.com

The interior is almost entirely gutted down to the wood frame. The marquee and vertical sign have been removed for off-site refurbishing.

I’m happy to say that the facade of the Los Gatos, as it’s shaping up, is on its way to actually being an improvement upon what was there before the current remodel began. The massing and proportions are well-balanced. The two porthole windows—which at first I thought might look hokey—are actually quite nice, and the new marquee structure, which actually will have a small porch on top, is neither overwhelming nor too small. Once the stucco and paint is applied, and the restored vertical sign and marquee “fins” mounted, the effect is, I believe, going to be excellent.

Those who have referred to the current work on this property as a “remodel” are incorrect. There was no remodel. The original theater was DEMOLISHED. As a previous commenter said: the ONLY original thing remaining of this theater is the marquee. That’s it. They COMPLETELY GUTTED the original property, down to the walls; I witnessed this by peering through a hole in the construction barrier at the front. A bit sad. So for all practical purposes, whatever you eventually see on the site (save for the marquee) is simply a new theater. Better than no theater at all of course, but no significant preservation took place.

I would have to respectfully disagree with the above comment that “no significant preservation took place,” as preserving the vertical neon sign and incorporating elements from the old marquee onto the new are indeed significant. Also, the streamlined walls which house the poster cases have been exactly duplicated to match the configuration from the 1940s. But I will agree that what is on the site is essentially a brand new theatre, not a restored one.

Observing the construction progress on this building, I do think they did a fine job with the rebuild. As Gary noted they did good work of incorporating the old neon signage, along with replicating historic elements. It is all quite visually appealing. Once they iron out the programming and find their niche, I have no doubt the theatre will see plenty of business.

We stopped by the theatre this evening. It is about to reopen. All the neon, LED lighting, and interior were lit up. The effect is stunning. I strongly recommend that all who are nearby do so. We are looking forward to patronizing this theatre.

We attended “The Amazing Spiderman 2” last weekend. This theatre is a dazzler! T hey did it right. There is a seamless blend between old style and new presentation. No—the auditorium murals were not reproduced, which is disappointing, but there are authentically replicated old style Art Deco fixtures and features galore which would be at home in any movie palace of 1930. There is a waterfall curtain, comfortable seats, beautiful carpet, small, but beautifully-appointed restrooms, LED cove lighting…and even the theatre’s old Ten-O-Win wheel, which is displayed over the staircase landing. The staircase railing is a beautiful Deco custom design.