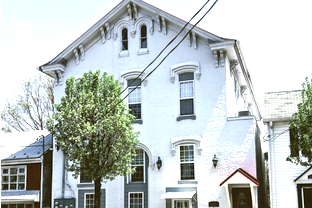 Housed in a former American Legion building on N. Baltimore Street at Church Street, the Holly Theatre opened April 22, 1942 with Priscilla Lane in “Blues in the Night”. Through the 1950’s it was operated by Allied Theatres. It was renamed Holly Art Theatre on November 25, 1970, screening adult movies. This closed in 1973. It reopened as the Mount Holly Theatre on October 20, 1978 and closed in 1983.

This theatre is no longer in operation. At last word it has been converted into an apartment building known as the Center Stage Apartments.

This theatre was owned by Helen and Richard Jones, they also had Silver Springs Drive-In, as well as a hotel in Mexico.. I worked for them a long time..

Holly Theatre was open circa 1992-93. At that time there was a sizable stage under the screen, which was perfect for the “Rocky Horror” cast that performed there. (The shows usually sold out, despite the theatre’s rather remote location and the movie’s availability on video.)

http://www.cinematour.com/picview.php?db=us&id=85251 I just found a picture of what it used to look like. I currently live there and am trying to find out more information about it. But it is hard to find pictures or any information.

Grand opening ad from April 22, 1942 with “Blues in the Nite” in photos. The Holly Theatre was housed in the former American Legion building. R.J. Jones bought the hall, converting it to the Holly Theatre and ran it from 1942 to November of 1995. Jones had hoped to find a new operator quickly but that didn’t happen.