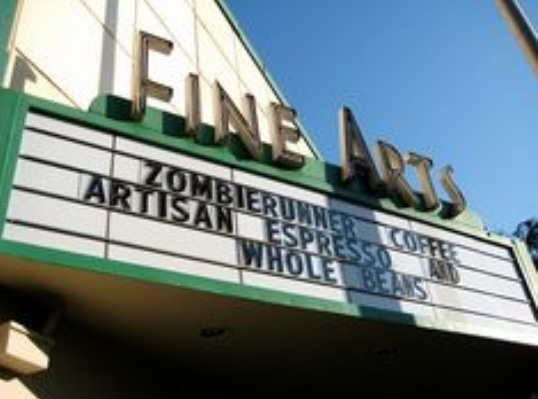 Originally named for a small community, Mayfield, which was later annexed to Palo Alto. The Mayfield Theater was originally a simple Spanish Mission style structure, but was given a plain Moderne style façade and marquee in 1951. It was still listed as the Mayfield Theater in the 1957 edition of Film Daily Yearbook. Following renovations in spring of 1951 it was renamed Cardinal Theater. The last chain to operate it was Renaissance Rialto as the Fine Arts Theater.

Closed in the late-1980’s, the building is now an oriental rug gallery, though conversion back to a theater would be relatively easy. The marquee still reads Fine Arts in neon, and the original façade still exists in part behind the 1950’s era fascia.

Last year, I got a quick tour from the lady who owns the running gear store and cafe which operate in the former theatre. There is very little to see, theatrically, in the former auditorium, which is almost totally given over to retail area. Some textured stucco walls and simple pilasters clearly date to the movie era, as do several cast plaster bowl-shaped light fixtures. Backstage, there has been very little change over the years. The wooden stage surface is still there, and for the most part, the walls have never been repainted. The proscenium is walled-off from the rest of the building. The owner told me that the neon letters on the marquee are still operational.

Interesting to see that Gale Santocono did the work on the theatre’s remodel in the 50s. He also did the decorative work in the Seavue Theatre, Pacifica, and the Varsity, in Davis. Early in his career, he did muralwork for the San Francisco Fox.

My father managed the Park and Guild theaters in Menlo Park, the Altos in Los Altos and the Find Arts in Palo Alto in the 1960’s when the theaters were owned by Roy Cooper, Westside valley Theaters. I do not think Mr. Borg was in the picture after 1960, unless there was a lease rather than a purchase.

My father who just recently passed away was the projectionest at the Fine Arts during the early eighties. Edie was the manager at the time. I have many fond memories of sitting in the booth watching my father run the projectors. I learned a lot from him about old carbon arc projectors and the change over signal in the upper right hand corner of a movie. I will always have a warm place in my heart for the Fine Arts and secretly wish the old girl will become a theater again. RIP dad and thank you for the experience at the Fine Arts.

This was the Cardinal Theater when I first went in the 1950s. I don’t remember it ever as the California. I think it changed from the Mayfield before 1953 then to the Fine Arts in the 1960s.

The Mayfield Theatre is listed at 165 Lincoln Street (the former name of California Avenue) in a 1925 directory for Palo Alto and vicinity.

The 1951 remodeling of the Mayfield Theatre was probably occasioned by a fire in 1950. This photo from the Palo Alto Historical Association depicts ruined seats piled in front of the theater, and is dated April 7, 1950.

The Stanford Daily of April 28, 1960, said that the Cardinal Theatre, after a brief closure for renovation in May, would reopen on May 18 as the Fine Arts Theatre. It would be under the same management as the Guild Theatre in Menlo Park, also an art house.

The scene in “Escape to Witch Mountain”, the kids were seen leaving the theater after watching a screening of the movie “Snow White and the 7 dwarfs”(both Disney movies).

Motion Picture Herald, Feb. 24, 1951: “The Mayfield, owned by Westside theatres, at South Palo Alto, is undergoing complete renovation and will be renamed the Cardinal.”