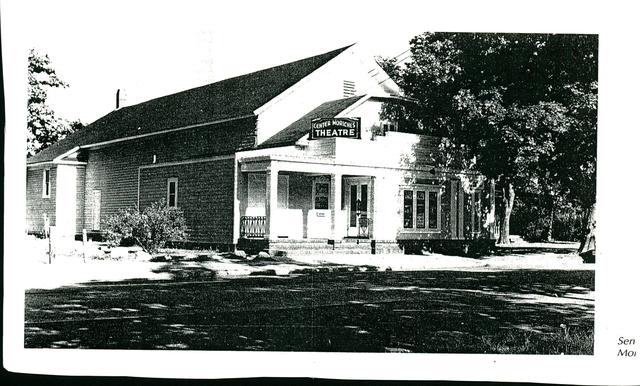 This medium sized, wooden, gabled building began its life as Senekes Hall, an opera house, in 1884. Sometime around the beginning of the 20th century it was relocated to its present site from Montauk Highway when Canal Street was built. In the new location the building served as, among other things, the gymnasium for the high school around World War I, before becoming a motion picture theatre. It is listed as the Opera House in the 1914-1915 edition of American Motion Picture Directory.

Somewhere along the way it also lost its Victorian architecture including a belfry. In the 1940’s a second entrance was provided since, initially, there was only a small flight of steps running parallel to the front of the building leading to a single door. The theatre eventually became part of the Prudential Circuit chain and closed August 7, 1955.

Shortly thereafter it reopened as a dry cleaning establishment, a simple transformation by removing the seats and bringing in all the cleaning apparatus since the auditorium was level. The lobby was also reconfigured and the second entrance removed. The only physical remnants of its history on site are two theatre cards from 1946 displayed behind the retail counter and the openings from the projection booth which has now been converted to an office.

Pictures of the opera house, the theatre and the cleaners (before and after an addition was built) appear in "Illustrated History of the Moriches" by Van and Mary Fields. I have found no images on line to which I could provide a link.

Wow, I never even knew this theater existed….
Here’s a google street view of it:

Finally scanned a photo and uploaded it.

The theater closed August 7, 1955 due to poor attendance; possibly because of competition from the nearby Shirley Drive-In.

There was some talk about Prudential swapping the building for property on Main Street owned by the VFW and building there. Didn’t happen.

Finally uploaded photos of the advertising cards I mentioned in the heading. They are getting quite faded.