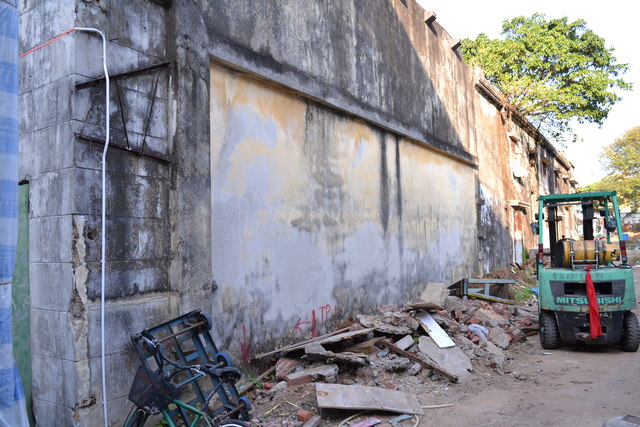 Cheung Chau Theatre was a small neighbourhood cinema situated in Cheung Chau. Cheung Chau is an outlying island off the southern coast of the Lautau Island.

There are two versions of its opening year. According to the "List of the Historic Buildings in Building Assessment" made public on 18th March, 2009, the theatre was built in 1931. A news article published by the Chinese language Hong Kong Economic Times said that the theatre opened to business in 1936. Both versions do not have references.

During the war years, no information is available about the theatre. The theatre re-opened at an unknown date after the war, and showed selected films until its closure in the 1990’s.

After its closure, the theatre gradually became a derelict building, while the screen and its iron chairs remain intact, the roof above the auditorium has partially collapsed. The wooden ladder leading to the projector room has also broken, and the projector room is inaccessible.

The stalls only auditorium was on the ground floor of the theatre building, with its Chinese name in four characters above the entrance and on top of the front facade.

The ceiling of the theatre near the proscenium has partially collapsed.

From the Chinese inscription on top of the front arcade, the theatre opened to business in the autumn of 1931. The Chinese name of the theatre is 長洲戲院.

According to news report, the former Cheung Chau Theatre will have its facade and ticket booth to be preserved, and the auditorium will be rebuilt as a shopping centre

The theatre will be preserved as a restaurant with the stage remains intact and a new projector installed. The restaurant will be opened in late 2014 .Films will be shown at the preserved theatre/restaurant.