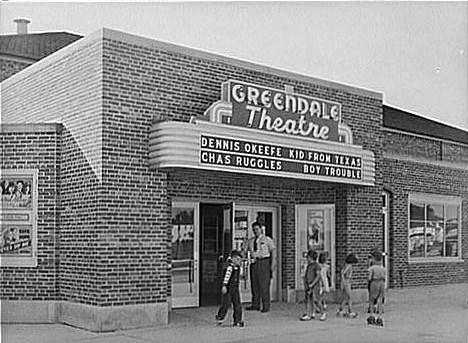 The GREENDALE was named after the suburb of Milwaukee where it was on the main street: “Broad Street.” This suburb was founded in 1938 as an urban planning experiment by the Federal government and is one of three then built typically about 20 miles outside of an existing major urban area. The other two are Greenhills, Ohio near Cincinnati, and Greenbelt MD, near Washington, DC. They planned a cohesive form of housing architecture and a main street bordered by the usual stores, a town hall, fire station, and library and, of course, a movie house.

The Greendale theatre was really a single story storefront cinema more reminiscent of the nickelodeons of three decades before than anything theatrical as one would have expected in the ‘30s. Of course, most of it was built by the Works Progress Administration as a means of putting the thousands of men out of work during the Depression and creating something that the government could not have otherwise afforded at union scale wages. The 600 seats of the Greendale were not luxurious, but in the days before television it was somewhere to go at night for those tired of the limits of radio and without a car or the gas for it, to drive into Milwaukee.

When the Southridge shopping center was built on the northern border of the village in 1968, its three little cinemas quickly spelled the death of the ‘old time’ Greendale Theatre with their newness, a short stroll from the closely packed residences of the ‘garden community.’ The Greendale was then returned to the storefront use it had originally been planned for, and when the SOUTHRIDGE CINEMAS were replaced by a foods court around 1990, there were no more theatres in this area south of Milwaukee.

Please let me know if you learn anything more about this theatre. Thank you. Jim Rankin =

The Wisconsin Historical Society says the Greendale Theatre opened on April 29, 1939. Here’s their page about Greendale. There is a gallery of Greendale photos, and thumbnails of the front of the theater appear on the second and tenth pages of the thumbs. There’s also a thumb at the upper left corner of page 8 captioned “Commercial Buildings in Winter” which I’m pretty sure shows the theater auditorium from the other side— the big building with the chimney.