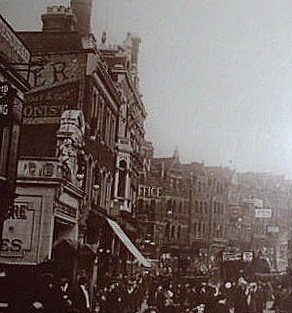 Located in the inner south London district of Battersea, close to Clapham Junction Railway Station. The Clapham Junction Cinematograph Theatre was the ninth cinema to be opened in the chain of Cinematograph Theatres by Montagu Pyke. It was built on the site of a former horse tram depot at the bottom of St. John’s Hill near the Falcon Public House. It opened on 27th July 1910.

From 1917, it was re-named Empire Picture Theatre and it was closed in 1923. In later years the building became Newbolton’s Furniture Store, but it was badly damaged in a fire in March 1979.