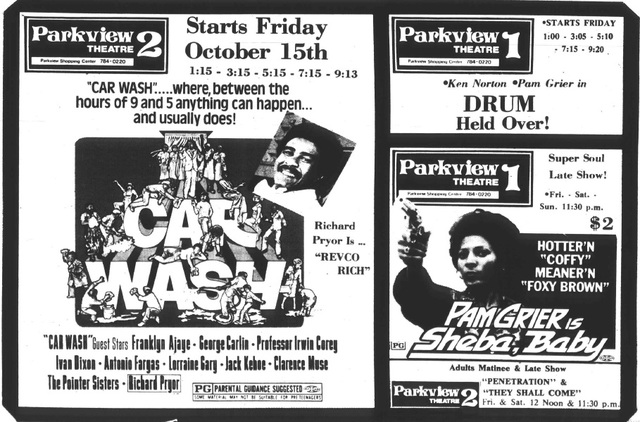 By the mid-1980’s, the Parkview Twin changed its format from showing first-run movies to become a discount movie house under Carmike Cinemas, until its closing in the early-1990’s.

Thanks for clarifying, Paco! I’ve been informed by a family member that back in the 70’s, when a lot of families in the area were going through tough economic times, this theatre hosted a day each week where you could bring in a merita bread wrapper and get into the movie for free!

No problem Element :)
Does anybody know where i can find any pictures of it when it was open?
I would really like to know how it looked like, since I recently had the privilege of going inside the theater(my friend’s dad has the key)

Best bet would be hit the local paper Archives and search.Sometimes the Grand opening ad would have a picture of the Theatre.That is what I did and for the most part; I had a picture or a nice artist drawing of the theatre.hope you find one.

<<< The Parkview wasn’t [a] twin until the late-1970’s or early 1980’s when it was under the Martin Theatres chain. When “Jaws” played here during its general release in 1975, the Parkview was still a single screen theatre. >>>

I disagree. The Parkview was a twin when “Jaws” played here in 1975. I have a copy of the opening-day ad for “Jaws” from the Winston-Salem newspaper and “Parkview 2” is how the theater in which it played is listed. Also, 1975 Winston-Salem telephone directories identify the theater as “Parkview Twin.” That, to me, seems satisfactory evidence the place was a twin at the time.

Mike Rogers and Michael Coate: I have found the grand opening advertisement on the date the Parkview Theatre originally opened. I will have the information re-posed on this site sometime before the end of this month. This information along with several other theaters in the greater Winston-Salem area will be reposted on the Cinema Treasures site. I have the original ads for the Thruway and the Parkway Theatres on the grand opening ads from the Winston-Salem Journal. Thank you. P.S. I have the original grand opening ad for the Hanes Mall Cinemas too.

The Parkview became a twin cinema in June of 1975 for it’s opening attraction of “Jaws”. Also listed as the Parkview 1 and Parkview 2.

A lot of great blockbusters played at the Parkview Theatre. “STAR WARS” played here first-run in 1977,and was one of the many films that was re-released too in 1978.

“RAIDERS OF THE LOST ARK” played here at the Parkview Twin first-run in 1981.

The opening attraction of the Parkview Theatre came on August 23,1972 with the exclusive engagement showing of CABARET starring Liza Minnelli.

It opened in 1972 as a single screen theater with a seating capacity of 700. By mid-1974,it was twinned by splitting the original auditorium into two sections making for shoebox size auditoriums with smaller screens.

The PARKVIEW THEATRE opened on August 23,1972 as a single screen theater with a seating capacity of 700. The premiere attraction for the grand opening was the exclusive Triad showing of “Cabaret” starring Liza Minnelli. By April 26,1974 it was twinned by splitting the original auditorium into two sections and was renamed the Parkview Theatres 1 & 2 under new ownership by Martin Theatres.