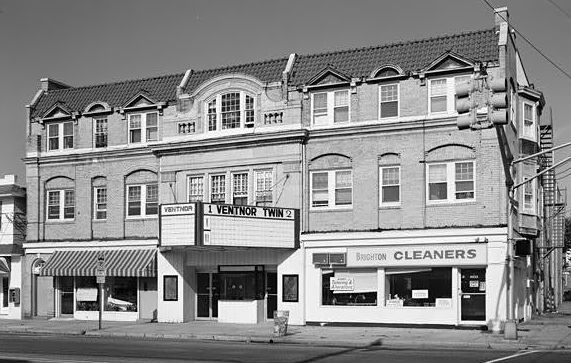 Situated in the heart of Ventnor City, New Jersey, the Ventnor Square Theatre is the last remaining movie theatre on Absecon Island. All of the others have either burned or were demolished. It stands today as a magnificent example of the Art Deco style.

It had been closed for a few years after a city inspection revealed that it was on the verge of collapse in 1998. Many thought that it could not be saved. Fortunately, it was purchased at a very nominal cost and to everyone’s amazement, it was fully restored within just one year and reopened in 2003.

In May 2018 plans were announced to gut the interior to create a 4-screen movie theatre, which was planned to opened as the Ventnor Square Theatre by spring of 2019. The interior was remodeled by co-owners Clint Buntin, Brett Denafo, and Scott Kauffman (and his father of the same name) into a 3-screen theatre. These men had previously renovated and reopened the Tilton Square Theatre in Northfield and the Harbor Square Theatre in Stone Harbor.

It reopened later than planned due to the Covid-19 pandemic, on May 22, 2021, as the Ventnor Square Theatre. The largest auditorium, with 272-seats, is curtained, has Dolby Atmos surround sound, has a stage for live entertainment and retains some original light fixtures. The other two auditoriums have 7.1 surround sound. All three screens have laser projection. There is also a restaurant and a bar. The railings, wood, and glass partitions of the staircase are original. The interior is meant to be retro 1920’s décor.

The guys who bought it have the Harbor Square Theater in Stone Harbor. Based upon what they did with the Harbor Square they will gut the theater and completely renovate. It will be interesting to see if it remains a two screener or if they divide it up into more screens. The larger auditorium at the Ventnor as I recall is quite wide and had a very large screen. If left intact dimensionally that large room could potentially be one of the best places to see a film at the Jersey shore.

I was there once when it was a twin but the only thing I remember is the theater on the right had masking and the left did not. If I recall correctly it was a tacky split.

Your memory of the Ventnor Twin is accurate. The theater on the right was much narrower than the larger on the left. The smaller theater had a 2.40 to 1 screen with side masking that was positioned pretty high on the wall and the seating rows had an odd slope…kind of like an S. The last film I saw in the smaller theater was in 1997 (Conspiracy Theory)and I do recall that the picture quality was dark and murky and the sound tinny mono. I don’t recall whether the larger theater on the left had masking (the last two films I saw there were in ‘scope) but the screen was really big and appeared to have an aspect ratio of around 2.2 to 1. At some point the larger theater had Dolby sound installed but not Dolby Digital.The last two films I saw in the big room were Forrest Gump and True Lies. As I recall, the projection for both films was quite good. I would guess that whatever renovation is done, it will include digital projection and digital surround sound.

More good news re The Ventnor Theater. In an interview on Downbeach Buzz from mid April, one of the new owners indicated the following: The theater will be gutted and more than likely end end up as a 3 screener. All screens will have State of the Art projection and multi-track (7.1) Dolby Digital Sound. There will be one what he termed “large format” room with a 50 ft screen. The apartments above the theater will be converted into a “Burger Bar” and a separate bar. Food/drinks will not actually be sold in the auditoriums but patrons may bring in food/drinks from the Burger Bar and Bar. Another adjacent building is to be torn down which will open up plenty of parking in a large lot behind the theater. The theater will be re-named the “Ventnor Square Theater” and is expected to be open by Spring 2019 and remain open year round.

Phily.com story on the rebuilding, with pictures.

I forgot about that slope in the floor! It was so pronounced that you had to be careful setting a drink or anything that could tip over onto it. I mean, I’ll be real honest, by the time I started going here on my own in the mid 90s, it really wasn’t in great shape. But I found everything about it charming, even the weird mildew smell.

As far as the renovation, they’ve obviously run into many issues, the most recent being Covid, and two years into the process, it still looks a couple months off from being operational.

I worked there as a union projectionist from 1973-1984. I also lived in the top floor Apt. on Weymouth Ave., in 1974-75. I have one of the old Western Electric 35mm sound projectors in my garage. When the Franks twinned it in 1979, I became manager/projectionist.

Will have new operators https://www.squaretheatres.com/