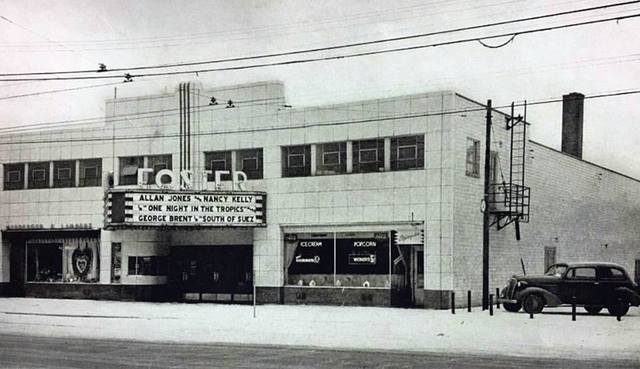 I am amazed the Foster is still open. In 1961 my uncle, who was a journalist for the Warren Tribune, thought it was time I saw a “serious” move" (I was a jr i HS), so he took me to see Ingmar Bergman’s “Through a Glass Darkly”. He was right. That was the first movie that had me thinking about what it meant for weeks afterwards.

lanasings2, I worked for your father, Joe Shagrin. He hired me to change the marquee. I got paid one dollar each time the films changed. This was usually on Saturday night with a new film on Sunday and Wednesday night. Sometimes I would get called to be the ticket taker and would get paid a dollar to take tickets. Best part was that I got to see all the movies for free. This was in 1952-53.

The Carmel Corn was on the left side of the building and Murberger and Lambert’s flower shop on the right. The Carmel Corn sold the popcorn until is closed and then it was sold in the theater. Joe Shagrin’s office was up over the Carmel Corn shop. The women’s and men’s rooms were over the marquee.

The balcony was a good place to sit with a girl. Especially as I had access to the key and could lock the door.

I’m writing a book on the history of Youngstown, and I’m looking for anyone willing to talk with me about the Foster Theater of yesteryear. You can reach me at

I remember seeing Mary Poppins there. But IMDB says that it came out in 1964. I couldn’t have been 4 years old with such vivid recollections. Does anyone remember when that played at the Foster?

Current article about the Foster Theatre.

I’m so excited about the revitalization! I’ve been speaking with the media about the history of that theater, as well as Youngstown’s theater heyday of days long past. The fundraising campaign will soon be announced.

Go Fund Me for the facade & marquee.

What do they plan to do with the Foster? A theater showing mainstream films would never be profitable because–correctly or not–the Glenwood Avenue area has a rather dicey reputation. And the theater isn’t equipped for live performances either (the nearby Youngstown Playhouse has enough trouble attracting patrons, mostly because of its location). Personally, I think they should have just left it alone. While porn may no longer be chic, at least it was still operating as a “theater.” From the sound of it, the new owners have no intention of making the site functional. A restored facade would be nice, but if the theater itself remains an empty, ghostly shell inside, what’s the point? The money could be spent on more useful projects that might actually improve the lives of low income Youngstowners.