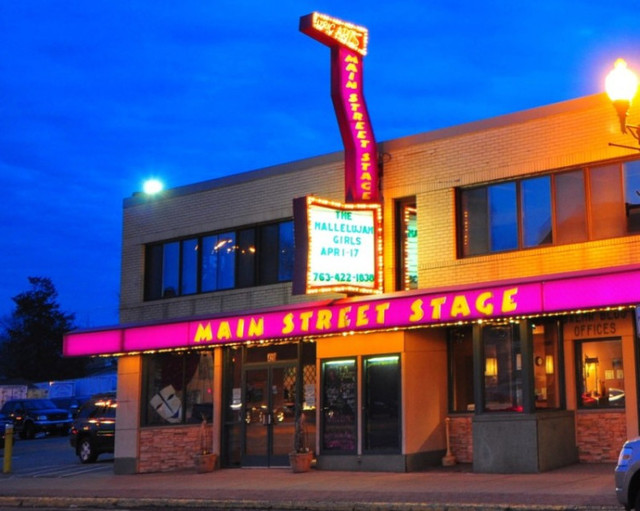 I couldn’t find when the Anoka Theatre opened but it was originally a single screen, and in the late-1970’s it was twinned. It was still showing movies through the 1980’s.

Prior to 2001 the Lyric Arts outgrew the facility they were using, and after renovating the closed Anoka Theatre the new facility opened as the Lyric Arts Main Street Stage in 2001.

They have been doing live performances since, they also have a program for the children.

Boxoffice of March, 1991, has an item about the reopening of the Anoka twin the previous Christmas. It says: “Built in 1949 and twinned in 1982, it now plays first-run films.”

An item from the December 10, 1949, issue of Boxoffice said the Anoka Theatre was nearing completion. The 1,044-seat house was being built by E.J. Bauhr, who ran a small circuit that also operated the State Theatre in Anoka.

Does anyone familiar with Anoka remember the Anoka Theatre having four screens in its last years? According to A PDF available from the web site of St.Paul architectural firm Vanney Associates, which lists 25 theater projects designed by Robert F. Vanney, one of them was a remodeling of the Anoka Theatre into a four-screen house. No date is given for the project.

Joe, I saw movies at the Anoka Cinema right up until the end and can say with a good deal of authority that it was always two, not to mention there is no way they could have added two more because there was simply no room.

Thanks, Jesse. If there was no room for expansion then it’s likely that whoever put the web site together for Vanney Associates simply recorded the wrong number of screens for the Anoka Theatre project. The only other explanation would be that an expansion was planned but never carried out.