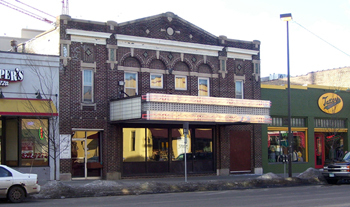 The Lyndale theatre is still standing. It was not demolished. It is currently for rent. Even the marquee is still there. It looks no different that the photo from 1982. It was used for retail for a number of years.

This is in reference to this page and the /theaters/31180 link as well. To clear all this up, many pieces of misinformation need to be corrected, so here goes:

Do not rely on Motion Picture Almanac, Film Daily Yearbook and Polk city directories for information. They are often more wrong than right. All they are good for is giving a theatre name and an address, then you have to check those out thoroughly from there. The seating capacities are wrong 98% of the time.

The Lyndale Theatre building is not large – even in the old days when seats were smaller and tighter – I doubt it was ever more than 500 seats and was probably closer to 400.

The foundation was in for the theater being built at 2932 Lyndale Avenue, according to an item in the December 26, 1914, issue of Construction News. The $31,000 project for the Calhoun Theater Co. had been designed by architect A.L. Garlough.

Also, this theater has not been demolished. It still shows up in Google street view at its correct address of 2932 Lyndale Avenue South.

Dave Kenney’s Twin Cities Picture Show: A Century of Moviegoing lists two houses called the Lyndale Theatre: this one, and one at 624 20th Avenue N., which he says operated from 1910 to 1913. I believe that the street name was changed at some point, and the modern address of the first Lyndale Theatre would be 624 W. Broadway Avenue. This site would be a few doors east of N. Lyndale Avenue, so the theater’s name would be plausible.

Just a couple items for clarification: The Lyndale was the New Lyndale for much of its early time, and it has always been at the 2932 Lyndale Avenue S address. That address is NOT in the Cedar-Riverside neighborhood but is in the Lowry Hill East neighborhood and the Lyn-Lake district. Since 2014, it has been the LynLake Brewery.