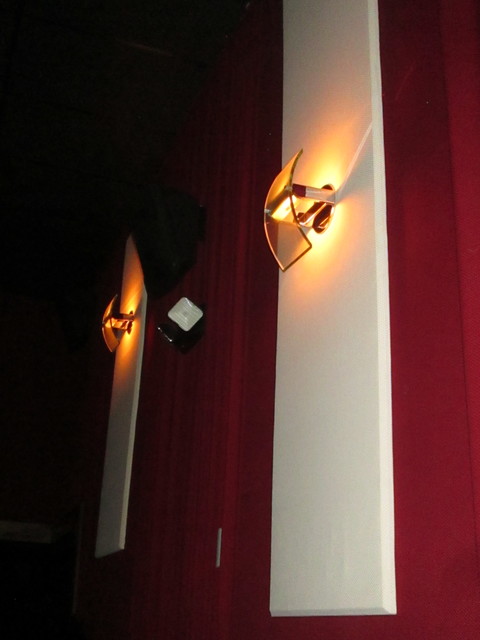 Located near to the town of Capitola, in the Scotts Valley Shopping Center. It was reported the the owner of Scotts Valley 6 Cinemas, Gary Culver, passed away on April 29, 2009, but the business would continue to operate.

The first thing that comes to mind about this theater is that over the years, the staff was always very friendly, sometimes even holding the door open for departing patrons and wishing them “Good night!”
This theater opened as the Scotts Valley Cinema around 1977. It began as a twin cinema—Scotts Valley’s first and as yet only movie venue as far as I know. Located at the back of what was then the Kings Village Shopping Center, it was advertised by a tall sign pylon trimmed in redwood, with two backlit plastic two-sided reader boards topped by a plastic illuminated sign reading simply, “CINEMA.” The reader boards had the numbers 1 and 2 permanently affixed. Below them was another reader board which was used to advertise special shopping center events. Later, when additional screens were added to the cinema, this reader board was pressed into service to advertise movies, and all reader boards were divided up into smaller segments to include advertising for what would ultimately be six screens. The decor was originally very minimal, as was so typical of the bleak 1970s trend in cinema design. The lobby was about as nondescript as they come, with plain sheetrock walls. Both auditoriums had mustard fabric on the walls, but they did have operating curtains, and the exits on either side were trimmed in matching fabric which draped simply but attractively on either side. By the 1990s, when additional screens were added, the color schemes of all auditoriums were done in various colorful fabrics, though the curtains around and infront of the two orginal auditoriums' screens were left in their original mustard fabric. The lobby was given a more colorful and festive feel.
I first attended movies here soon after its opening, as my best friend lived in Scotts Valley during our Junior High through Junior College years. I remember seeing “Battlestar Galactica” in Sensurround during those years, as well as “Heaven Can Wait,” and “House Calls."
Since 1982, I have kept a record book of all theatrical screenings of movies I’ve seen, and those I’ve seen from that point on at the Scotts Valley are as follows:
1982
"Cinderella"
1983
"Peter Pan” with “The Last Unicorn"
"Flashdance” with “48 Hours"
1984
"Greystoke—The Legend of Tarzan, Lord of the Apes” with “The Bounty"
"The Neverending Story” with “Jungle Book"
1986
"Wildcats” with “Best of Times"
1991
"Father of the Bride"
1993
"The Joy Luck Club"
1995
"Now and Then”

CineLux now runs this Scotts Valley Cinema and they are about to start on a major remodel. The first up is the brand new marquee out on the street,It looks great. Next will be the addition of stadium seating and a 3-D projector for the largest screen cinema. I hope they put in a curve screen in the big theatre #4. Good luck to CineLux Theatres from San Jose CA, they also took over the 41st Ave Cinemas in Santa Cruz CA.

Good news the Scotts Valley Cinema will have 3-D coming with the ‘Dragon’ movie March 26 2010. This will be the first 3-D setup in the Santa Cruz area so business will be brisk. I’ll find out if it’s the digital system or the new Tecnicolor 35mm film type. Hopefully they will bring in a few 3-D movies that were not shown in 3-D in the Santa Cruz area the first time around so local people can see them in 3-D. This Cinema is listed near Capitola CA but it is next to Santa Cruz and Felton CA not Capitola. About 10 minutes from the beach city of Santa Cruz CA.

A proposal has to add four more screens to this theater as well as a wine bar, add stadium seating and digital projection: View link

Yes the theatre has been up graded at least 7theatres. The last two for a total of 9 will be remodled this Fall. Paul at CineLux did a great job and put in the first curved screens in Santa Cruz county and D Box in a few cinemas plus 7.1 surround at the Scotts Valley Cinemas. With all new seats, slanted rows, rugs ect It’s a very nice place to see a movie. This is the first theatre I have ever visited that has different lights on the side walls in each auditorium. Now if Gary will only put in blue lights in some of the cinemas or orange, red or green this will make my day. The theatres 5/6 and 7 are the largest. Check them out If you are visiting the Santa Cruz mountains. They are waiting for there 3-D Dolby wash glass system.

Sorry I ment to say Paul of Cinelux Theatres the new owner. Gary was with the Scotts Valley when I first started going. I miss the Burl Theatre in Boulder Creek CA and the Drive In they had also in Boulder Creek. Now Santa Cruz has no more outdoor movie theatres.