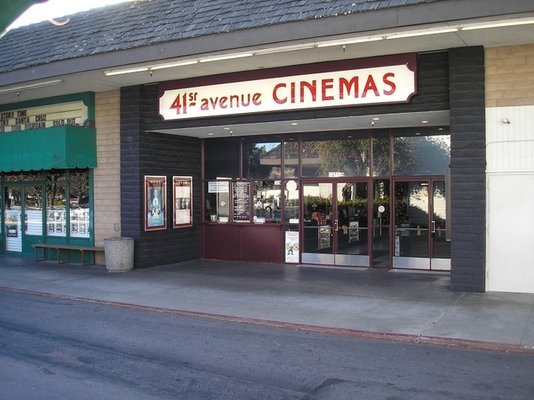 The 41st Avenue Playhouse was opened as a triple screen cinema June 28, 1973. It had 1,250 seats. It was reported that the owner of 41st Avenue Cinemas, Gary Culver, passed away on April 29, 2009. The cinemas will continue to operate.

In February 2015 work began on expanding the cinemas to 8 screens which opened July 20, 2016 as the Cinelux Capitola Café & Lounge.

That very long engagement of the original “Star Wars” mentioned in the post above was for a total of 26 weeks. Like many of the theaters/markets in which “Star Wars” played, the duration established a long-run record for the Santa Cruz area. In addition, the 41st Avenue Playhouse installed a Dolby sound system (CP-50 model) for the “Star Wars” engagement, one of only a few theaters in California’s Central Coast and Northern regions to do so.

In all the years I went to the movies at the 41st Avenue Playhouse (starting with Blade Runner in 1982), to the years I worked there as an assistant manager (1986-1989) to the last time I visited there a month or so ago, it always had three screens.

In the #1 house during my years there, there was still a Sensurround speaker behind the screen. It might still be there, for all I know. It was no longer functional by then, and I never got a straight answer as to why it was still there long after the rest of the Sensurround system had been pulled.

1 and #2 during my years there were equipped with Cinematica projectors, with the rear 12000' reels still functioning. Those projectors were the best damn projectors I’ve ever worked with in my now 23 years in exhibition. When the 1989 earthquake hit, the #2 projector toppled over, taking out the Christie Autowind for that screen, but all we needed to do to get it working again was put back upright. Strangely, even the bulb in the lamphouse survived the topple. Incredible machine. I hope those things are still there.

Plans to build what would become the 41st Avenue Playhouse were announced in the August 21, 1972, issue of Boxoffice Magazine. The item said that the three-screen house, the first of its kind in Santa Cruz County, would have approximately 1250 seats.

It was built for the Kindair Corporation, a local theater circuit based in Monterey, California. The recent opening of the house was noted in the July 30, 1973, issue of Boxoffice, but no details about the theater itself were given. The first movie shown was a benefit premier of “Sleuth.”

The Kindair circuit was apparently acquired by United Artists sometime in the 1980s.

Thanks Joe, for establishing the opening of the 41st Avenue Playhouse for the record. I moved to Santa Cruz County August 30, 1973 (I was ten), and probably went to that theater for the first time in late ‘73 or early '74, to see “Chariots of the Gods?” I remember there was actually an usher in the lobby where the hallway split to the left and right to go to the various screens, and he would ask you which movie you were coming to see, and then direct you to the appropriate auditorium. This was in addition to the usher who tore tickets at the door. I remember the staff wearing black jackets and slacks, white shirts, and black bowties.

Cinelux Theatres, Inc. of San Jose, CA is now operating this theatre. They have a very good reputation and will no doubt better the operation of this facility.

Nice to hear that Cinelux has the house. I rarely see movies at their theatres—just out of happenstance, not preference—but I have long heard that they’re good folks. Their Almaden in San Jose, and Plaza, in Campbell, were once overseen by Jack Gunsky, a onetime manager for Fox West Coast. Theatres once managed by him include the Fox in Watsonville and the Fox (California) in San Jose. So perhaps a little bit of the old time exhibition know-how has trickled down through the generations. Here’s hoping the 41st Ave. has many more successful years ahead of it.

I was employed with Gary Culver for 2 years before his unfortunate passing and with the theater during it’s transition into a Cinelux theater. As glad as I am the theater may continue to survive, I strongly believe the Nickelodeon would have been far better than the corporate trash that is Cinelux. After only two months of staying with the theater after Cinelux took hold, I quit, happily, to get away from after witnessing a place I loved become soulless. Not only does Cinelux management not have a single intelligent mind among them, screen shows and advertisements precede every showing, dulling your every sense to the extreme. I’d recommend the theaters in downtown Santa Cruz such as the Nick or the Del Mar, as they have far happier and relaxed atmospheres without the corporate garbage.

Following up on Joe Vogel’s post from May 2009… by the time I moved to Santa Cruz in 1982, the Playhouse was already a part of the UATC circuit. A late 1980s lawsuit against UATC by a local independent exhibitor (which can be read at View link) states UATC had already purchased Kindair by the time their Movie 1 & 2 Theatre opened in February of 1984.

Good news!!! The 41st will soon be a 8 Plex. Paul of Cinelux has taken over the old Capitola Books spot next to the theatre and at this time is adding 5 new screens for a grand total of 8. A late summer 2015 will be the target date for all 8. I believe 2 screens are still being used during the current construction. I took a peak last week and It looks like these new additions will look nice and blend In with the original 3. Lets hope Paul of Cinelux puts in some curved screens like he did in his take over of the Scotts Valley Theatres and installs the first Dolby Atmos® sound system in the Santa Cruz area with a super large curved screen for that screen. Stop by If you are in the Capitola area just South of Santa Cruz CA.