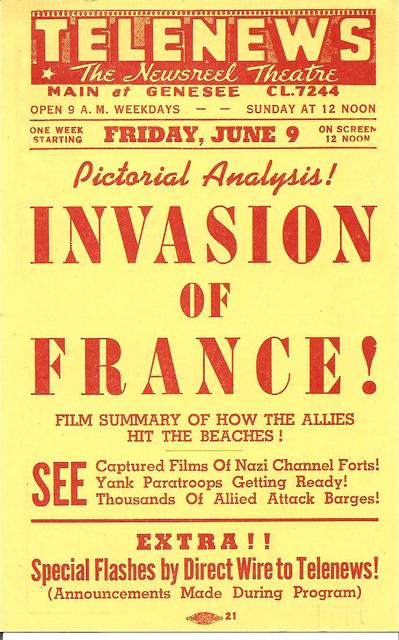 Opened in 1909 as the Vendome Theatre. It went through many name changes over the years. During World War II it showed newsreel footage.

The address of the Telenews Theatre was 525 E. Main Street.

The document notes that the Vendome was apparently a conversion of an existing building and the theater was designed by architect F.A. Baynes; that it extended through the block to Washington Street; and that at the time the document was written it housed a Chinese restaurant, which is apparently still there. Google Street View shows the Washington Street end of the building, as Main Street has been converted into a transit mall and the camera car didn’t travel along this block of it.

The document also carries a cryptic note saying “Not to be confused with the Empire at 261 Main, the Empire at 1514 Main, or the Empire at 164–170 Pearl.” This is odd, as Empire Theatre is not listed among the aka’s for the house.

When I searched the address on Bing Maps, plain Main Street fetched up in a residential neighborhood in West Seneca. Adding E. to it put it in the right place. Google Maps does go to the downtown Buffalo location with or without the E.

Bing’s map quirk is especially odd considering that Main Street runs north and south, not east and west. But I’ve found that it works with any directional indicator- N., S., E., or W. Only the plain Main Street goes to the wrong location.