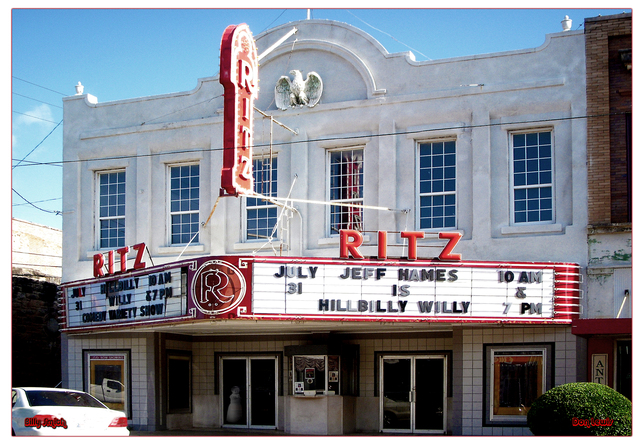 Built around 1899, and originally constructed as a dry goods store, this was the oldest and longest running family owned/operated movie theater in the state of Oklahoma when it closed in 1988.

When purchased by Jake Jones, Sr. in 1911, the Cozy Theatre was opened on March 19, 1911. Around World War I, the building was remodeled to its present 40' width and shortly thereafter became a stop on the state vaudeville circuit.

In 1926, the theatre was renamed the Ritz Theatre, and Shawnee’s first talking motion pictures were shown.

The Ritz Theatre is an Federal Revival style, two story building. The first floor and auditorium are in good condition and reflect lighting fixtures designed and made by Johnny Jones, son of Jake Jones, Sr.

The second story was originally used as a boarding house/hotel during the railroad and oil boom days. Architectural details are still intact but it desperately needs restoring.

In 2000, the Jones family gave the theater to the Soceity for Revitalization of Downtown Shawnee, Inc. This historic landmark holds the designation of "Save America’s Treasures".

Since 2000, SRDS held four to six performances annually and raised $60,000 towards renovations and restoration. It now operates ful time as a live theatre, and renovations continue when funding allows.

From 2010 photo views of the Ritz Here and Here in Shawnee.

Here is a link on YouTube. This is just short video from one of our monthly shows. We try to bring one event to the Ritz each month and are looking for more things to do. We have just about got the old popcorn machine fixed and we’re pretty darn excited about that!

Take a look at what the Ritz Theatre neighborhood looks like today,
View link

Looks like the signboards are missing from the marquee.Cosmic Ray.

We’re sprucing up this lobby with a little paint and such. Should look real nice.

From 2010 a photo of the Ritz Theatre in Shawnee.

The March 25, 1916, issue of The Moving Picture World reported that the Cozy Theatre in Shawnee was to be remodeled and enlarged:

“The work of remodeling and enlarging the Cozy theater, Shawnee, Okla., in which $7,000 is to be expended, is to begin at once. With the contemplated enlargement of the Cozy a new firm has been organized to conduct this theater. A. J. Cammack has gone in with Jake Jones and Nicholas Albert, the proprietors heretofore, and the firm will be known as Jones, Albert & Cammack.

“Increasing business merited the enlarging of the Cozy. The new dimensions of this photoplay house are 40 by 140 feet. It will have a seating capacity of 636. The proprietors expect to have the new place completed in time for Easter. The Cozy when completed will be a worthy addition to the, handsome structures in Shawnee.”

A.C. Davis was my great grandfather, and he did not move to Shawnee until 1901, so he couldn’t have been the architect of the original building.