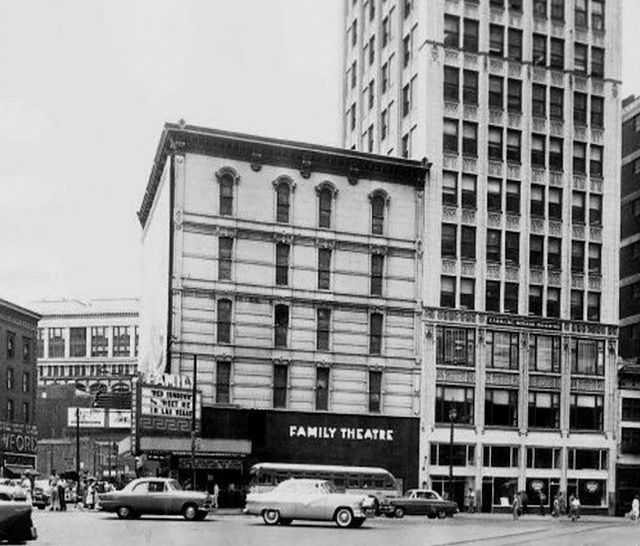 Built within the former Kirkwood Hotel on Cadillac Square, the Family Theatre opened on May 3, 1909. It began to screen films five years later, starting with the comedy "Tillie’s Punctured Romance". The Family Theatre, designed by Fuller Claflin, could seat 943.

After decades as a popular first-run house, like so many other theaters, the Family Theatre switched over to pornographic features in the 1960’s, and created quite a stir, not so much for its films, but because it didn’t change it’s wholesome-sounding name. However, it did soon change its name on June 2, 1967, to the Follies Theatre.

On July 26, 1973, during a screening of "Deep Throat", the Follies Theatre caught on fire. However, as they fled the burning theater, some customers actually stopped at the box office to ask for their money back!

The shell of the theater was demolished a couple months later.

Pictures of Fire and Aftermath including the Deep Throat on the marquee: 1, 2, 3

Here is a larger version of the LOC photo:
http://tinyurl.com/5vzgsu

The building that was converted into the Family Theatre was built in 1872-73 as an office and commercial building. Despite conversion of the upper floors into a hotel in 1880, then back into offices, then back into a hotel again in the 1890s, and finally the gutting of much of the interior for conversion into the Family Theatre in 1909, the facade remained essentially the same for decades. The original architect of the building was Mortimer L. Smith. The building’s history is told on this web page, where it is listed as the Second Williams Block.

Sounds like somebody didn’t like the kind of movies this theater was showing so they had it torched.