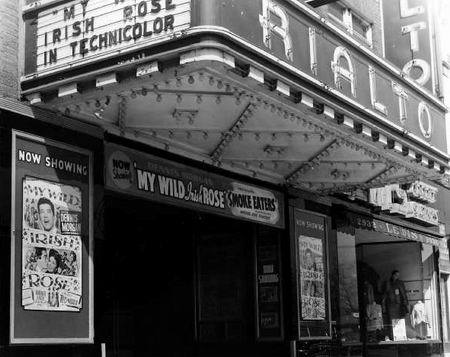 I’ve found references to the Rialto in Boxoffice Magazine as early as 1939, when it was taken over by Associated Theatres. The most recent reference I’ve found is from the August 25, 1956, issue, in an item which said “The Rialto Theatre at Wyandotte, which was reopened by Bible and Christian Books as a religious film theatre, has been closed and is now for rent for meeting purposes.”

This was the “New Marx Theater” built on the NW corner of Biddle Ave & Sycamore Streets. It was built to replace the Marx Opera House (1896-1908) that burned in a spectacular fire in June of 1908. The “New Marx” or simply “Marx Theater” was built at a new location farther south down the West side of the block, from the old Opera House site. The Marx Theater, was formally opened in 1911 and had the typical operations model for a “Moving Picture Venue” in small and mid-sized cities by having storefront tenants attached to the building, to provide additional support revenue during the slow season, when no new movie releases were available. It was renamed the “Rialto Theater” when it was sold out by the Marx heirs to that franchise, in 1921, and continued to remain at that site until 1934. In that year, the “Rialto Theater” relocated & moved to its new location it had just remodeled at 2938-Biddle Avenue. It was also on the West side of the commercial block of Biddle Avenue between Elm and Oak Streets, just south of present day R. P . McMurphy’s. Since the new “Rialto” location had relocated to a smaller and more narrow lot “footprint”, and because of major, rapid business practice changes in the movie & distribution industries, their new building did not have the typical small stores located in the front of their new location. The “Rialto”, like the nearby “Majestic” Theaters (located on the other side of the street) both remained in operation until the mid/late 1950s, when competition with the emerging modern “Multi-Cineplexes” forced them out of business. People are frequently confused with the locations and years of operation for Wyandotte’s “Big Three” Motion Picture Theaters, with these two franchises, along with the introduction of the “Wyandotte Theater” (both the Main & later Annex) in 1938. There were multiple site locations over the years, as they also expanded (and contracted) as the industry continued to change. The New Marx/Rialto Theater building was heavily remodeled and rebuilt after the theater operation left in 1934. This highly desirable corner commercial property, however, was sold to the S.S. Kresge’s 5 and Dime Store retail operation and remained at that location, until it too closed in the mid-1960s when that franchise’s remaining staff and inventory were relocated to the newly built store in the Southgate Shopping Center. Kresge’s actually (briefly) had two operational locations at one time, but just closed the Downtown Wyandotte store when it was no longer able to break even. Here is a view of the “New Marx/Rialto” Theater and that Commercial Block along Biddle Ave, between Sycamore and Maple, shown in the early1920’s, from our archival collection. Note that Wyandotte actually had a number of other early “Moving Picture Houses”, well before the Marx (1911) and the Majestic (1916) Theaters,

Photos as the Marx Theatre and original Rialto corner location added, Marx Theatre should be added to Previous Names.

The Rialto moved down the block in the history above, which is the first two photos posted in the gallery posted by Granola and Chris1982.

If you want I can add a separate page for the original Marx/Rialto Theatre, and transfer the photos there. Please advise.