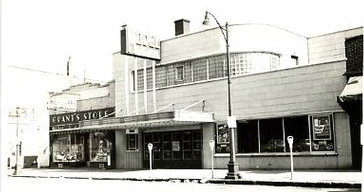 The Model Theatre was opened June 16, 1938, and during the 1940’s it was operated by Paramount Pictures Inc. through their subsidiary W.S. Butterfield Theaters Inc. and Butterfield Michigan Theaters Co. It continued operating through to at least 1950.

The Model Theatre was a Pereira & Pereira-designed house, opened about the same time as their more famous Esquire Theatre in Chicago. It was originally operated by the Carley Amusement Company, associated with Butterfield Theatres.

Boxoffice Magazine of September 17, 1938 presented a multi-page feature comparing the Model and the Esquire, with several photos of each house (9 pages of photos altogether) and text by Bill Pereira. Naturally the Esquire gets the bulk of the coverage, but the Model is well represented.

The opening date of the Model was June 16, 1938. I’ve not found the Model Theatre mentioned in Boxoffice later than September 29, 1956, in an item saying it was being reopened.

The September 17, 1938, Boxoffice article which includes photos of the Model Theatre is now to be found at this link The first page of the article has a photo of William and Hal Pereira.

For some reason, Hal Pereira, William’s brother, and his partner in the firm Pereira & Pereira, has often been conflated with an older architect, Percival R. Pereira. Percival Pereira was associated with C. Howard Crane in 1921-1922, and is supposed to have designed the interiors of the Fox Theatre in Detroit, but all the Pereira & Pereira theater designs listed at Cinema Treasures were William and Hal’s work. I’ve been unable to discover if Percival Pereira was related to the Pereira brothers or not.

Well, it looks like some of the theaters attributed to Pereira & Pereira at Cinema Treasures (Downtown Theatre, Detroit, for example) are actually the work of Percival Pereira. It’s going to take some time to sort this out. Information about Percival Pereira is rather thin on the Internet, and information about William and Hal is not much more plentiful.

The architect field is still not right. The principals of the firm of Pereira & Pereira were William Pereira and Hal Pereira. Percival Pereira was an older architect who was never associated with the firm.

The firm was founded in 1931, so any theaters attributed to them that were built prior to 1930 are probably the work of Percival Pereira (except, of course, in the case of theaters that were remodeled by the firm in the 1930s.)