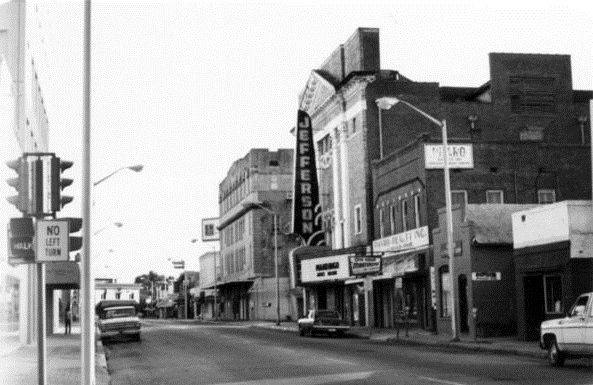 The Jefferson Theatre dates back to at least 1930. It was still operating in the 1950’s.

Somewhere, I’ve got a photo of this old gem. Saw many classics there like How the West Was Won. My Grandfather told of going to the theater as a boy when it showed silent movies. They would get enough money to get one of them inside and he would go to a side door (he recalls it as a screen door), and let the others in too.

My father remembers paying a dime for admission.

The Clerk of Court’s office in Lafayette has a wealth of old city photographs, among them are two pictures of this old house at the end of its run in 1976. Apparently, the final feature was “Goodbye Bruce Lee” and afterwards, the marquee retained the “Goodbye” before demolition.

The Jefferson Theatre in Lafayette opened in 1905, replacing Falk’s Opera House. It was a new modern brick theatre and Lafayette was now able to be entertained by Acting Troupes from all over via the Southern Pacific Railroad. I remember the Jefferson as a movie theatre where I saw movies like Dr. Zhivago, The Green Berets, Fantastic Voyage, The Evil Kneivel Story, Shaft and more. Towards the end of its life it showed mostly black exploitation & Kung Fu movies that followed in the wake of Shaft and Bruce Lee.

I remember seeing “Funny Girl” with Barbra Streisand in 1969. It had beautiful red drapes on each side of the screen with fringe. A large balcony. Very victorian in appearance. A pity it was torn down and not restored to be used for something else like plays.

I worked there in the 60’s & saw several great movies.The theater would stay packed on the weekend’s. Yes, it’s a shame they had to tear it down.

I can’t understand why they would not have renovated this palace of a theater. I go back to the early 1940. Saw may acts and great movies. The right person could have made this jewel. Now you have a parking lot.