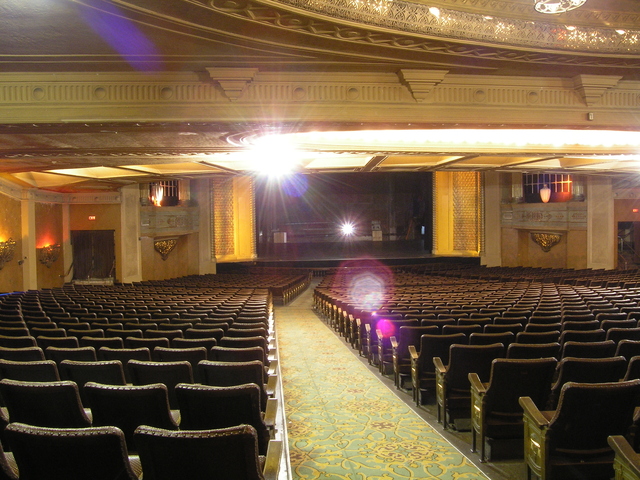 The beautiful Palais Pictures when built had 2,968 seats, and was the third largest theatre in the southern hemisphere, after the State Theatre and Regent Theatre in Melbourne. It opened as the Palais Pictures on 11th November 1927 with Janet Gaynor in “Seventh Heaven”.

The Palais Pictures is situated on the Lower Esplanade in the Melbourne sea-side suburb of St. Kilda. Its two domed towers correspond with that of Luna Park (amusement park) which is next door on its southern side.

The Palais Pictures retains all its original décor, except for the dress circle external balcony which has been filled in. The interior auditorium is almost completely untouched except for an addition to the fly tower, the orchestra pit extended and more dressing rooms to accommodate live theatre. Some years ago, the public health authorities insisted that a fire exit be installed on the rear of the balcony, on the northern (Palais de Dance) side. This reduced the seating capacity to 2,896. It was re-named Palais Theatre many years ago.

It is one of the most beautiful theatres in the Melbourne area and although totally under-utilised, it still had a fairly steady amount of bookings until closing in 2007.

Taken over by the city, plans are underway to fully restore the building, and in September 2010, a grant of AU$2.5 million was approved by the state government. The Palais Theatre is now re-opened as a concert/theatre venue, with occasional film screenings of a specialist nature, film festivals etc. It is leased by Live Nation.

The Palais Theatre is Listed on the Historic Building Council’s Register.

Seems no one has photo’s of inside of Palais Theatre, this is some of the interior roof domes. They were taken at night, and display the lighting effect. There is 2 pictures of each, one is normal the other is enhanced to provide more detail of the roof artwork on each dome. (Sorry about the full links i dont know how to do the hide and click link thing)

Will be very interesting to see how the domes shape up after the reno, as they are already very impressive despite neglect.

I have recently heard that due to financial hardship from the consortiums funding this ‘Triangle’ project and due to the economic climate, that the project is no longer going ahead – and so too have the $20million dollar plans to restore the theatre.

WOW, WHAT A MOVIE THEATRE !!

The building is open & doing great business with live acts under the new management.

Added: A great group photo taken yesterday afternoon (06/14/15) of The Age Music Victoria Hall of Fame inductees outside the iconic Palais Theatre in St Kilda, Melbourne. Photo credit and copy courtesy of The Seekers. Via The Seekers Facebook page.

I think the Palais Theatre is not far from Luna Park(an amusement park, only one of the two remaing Luna Park’s in Australia, the other is in Sydney) opened in 1912(?). I the Australian tv show Rockwiz may filmed one or two specials inside the Palais Theatre?

I think that area is called St Kilda?

The Palais Theatre was seen briefly on the tv series Tony Robinson’s Time Walks(series 1, episode 8 – St Kilda). I think there a cinema/theatre close by the Palais Theatre, seen in the same episode?

From what I understand this theatre has TWO bio-boxes (projection rooms). The original one is way high up in the domed roof.

Think that there was only ever a single operating bio-box, however at one stage it was moved to another location, and the space replaced with lighting equipment – GL