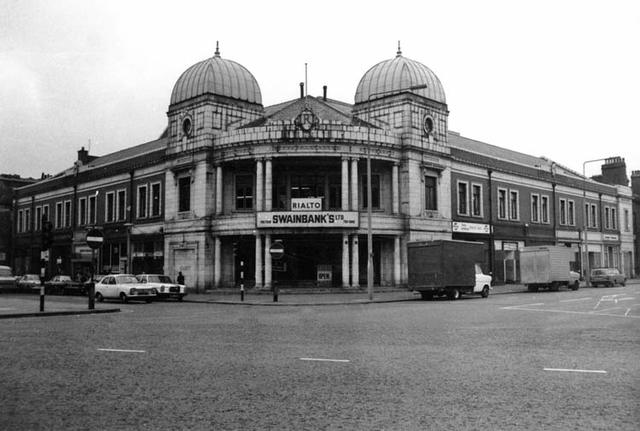 Built by an independent company, the Rialto Theatre was a prestigious cinema, located just one mile from the city centre on the corner of Upper Parliament Street and Berkeley Street in the Toxteth district.

The Rialto Theatre opened on 7th October 1927 with William Boyd in "The Last Frontier". The imposing corner facade was covered in white tiles and had a central balcony, flanked by two large towers. There were 12 shop units, which brought in extra revenue from rentals.

Inside the auditorium, seating was arranged for 1,305 in the stalls and 500 in the balcony. There was a wide proscenium and an 18 feet deep stage. Other facilities in the building were a dance hall that could accomodate 500 dancers. The resident orchestra at opening was Billy Cotton’s London 12 piece Savannah Band. The ballroom was decorated with large painted murals on the walls, giving Venetian views. There was the Rialto Garden Cafe which had 60 tables, and was decorated with painted murals of the Wye Valley. Also included was a fully equipped billiard hall.

The Rialto Theatre was taken over by Gaumont British Theatres in May 1928. It screened Al Jolson in "The Jazz Singer" from 4th February 1929, and was equipped with Western Electric sound system from 2nd September 1929, when Laura La Plante in "Showboat" was shown. Films ran concurrent with the Gaumont owned Trocadero Super Cinema in the city centre. After Gaumont converted the Royal Hippodrome Theatre in the Anfield district into a cinema in 1931, the Rialto Theatre mainly played second run films, concurrent with the Royal Hippodrome Theatre.

The Rank Organisation closed the Rialto Theatre on 29th February 1964, with Doris Day in "The Thrill of it All" and Ab Abspoel in "Silent Raid"(De Overal). Several members of staff were transferred to the Royal Hippodrome Theatre.

The building was converted into an antique furniture store by Swainbanks Ltd. The Rialto Theatre was destroyed by arsonists during the Toxteth race riots, which ravaged the area in July 1981. The road junction where the Rialto Theatre was sited, was at the epi-centre of the riots. The remains of the building were later demolished and a block of shops and offices named Rialto House was built on the site.

A photograph of the remains of the Rialto Theatre in the aftermath of the Toxteth Riots, July 1981:
View link

Apparently rioters targeted the furniture emporium, as those on benefits received grants in the form of vouchers to be spent at this store only. The prices for the second-hand furniture was very high for what it was, so the vouchers bought less than was perhaps anticipated, hence being targeted….