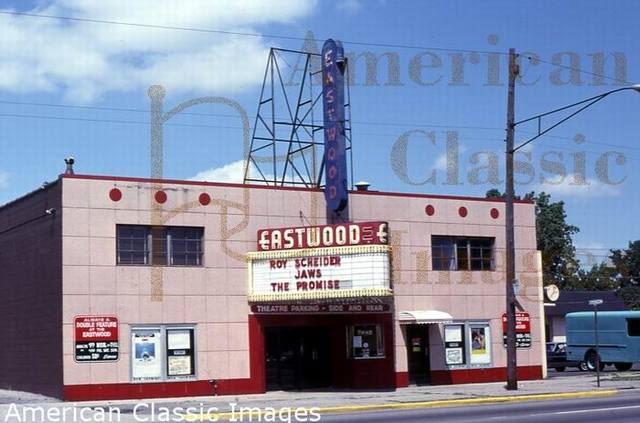 Later, the former Eastwood Theater was a club called the Wired Frog back in 2003, but it has now closed.

It was a block away from us. The neighborhood’s giant prototype flat screen TV. In the 50s, a kid under 12 got a double feature and two (?) cartoons for a quarter. The twin-door entrance in the little lobby was black padded vinyl studded with silver stars. A small clock ringed with purple neon hung high on the wall on the right of the screen. During those Saturday matinees, ushers' flashlights would go bouncing down the aisles looking for rowdy kids they’d sometimes eject. Would lose myself in movies like “Moby Dick” with Gregory Peck, which was SRO that matinee, and “The Vikings” with Kirk Douglas. Great place. Great memories.

The Eastwood Theatre was located at at 21145 Gratiot Avenue in Eastpointe, Michigan. The accompanying June 1949 Kodachrome slide image was shot by my grandfather Albert S. “Al” Johnson, whose company, Johnson Construction Co., built or remodeled the theater.

The new-looking bare block walls suggest that the project was new construction. The use of the word “Cool” painted in two places on the front of the theater highlight its air conditioning system. The tan and red porcelain-like tiled front, and the red art moderne/art deco style doors with matching octagonal glass (a type of “Johnson doors”) all were typical elements of Johnson-built theaters in the 1930s through 1950s.

Although the Cinema Treasures and waterwinterwonderland.com websites indicate that the theater opened in 1942, Al’s slide is labeled “6 - 49” and the marquee says “Open next Thursday June 30.” June 30 fell on Thursday in 1949 (and on Tuesday in 1942) so I believe the June 30, 1949 opening date is correct.

Another possible explanation is that the theater opened in 1942 and was closed for remodeling just seven years later in 1949, but that doesn’t seem likely.