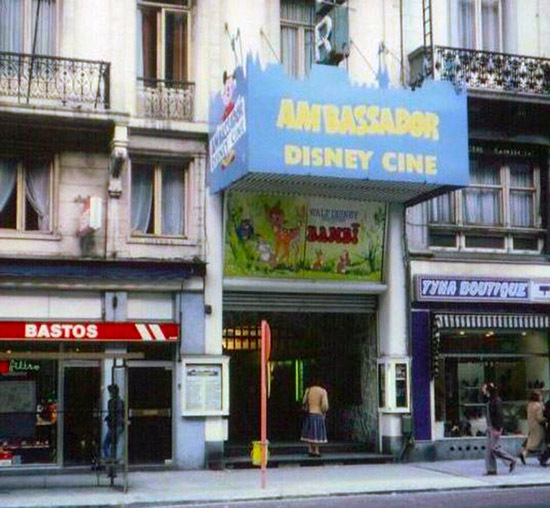 On the Rue Auguste Orts, near the Bourse in the beginning of the 20th century there was a theatre named Olympia which specialised in so called ‘cafe concert’, very popular at that period. It became Ambassador in the 1920’s and cinema in 1930. Seating was provided in orchestra and two balcony levels. One of the first films shown there was “Je Chante” with Charles Trenet, which makes a good transition from a theatre concert hall to cinema.

It continued in the 1940’s with for example “Unconquered” with Gary Cooper. It often showed films concurrent with the Scala Cinema, and sometimes with Victory Cinema. “Forbidden Planet”, “The Girl Can’t Help It”. In 1957 it showed “Around the World in 80 Days” in Todd-AO. I was there as a little kid.

The cinema was then equipped for 70mm films and showed blockbusters with success; “Ben Hur”, “West Side Story” “The Longest Day”, “Cleopatra” and “My Fair Lady” which had the cinema’s longest run from December 1964 to January 1966. In the 1970’s it became specialised in movies for children, cartoons in particular and was renamed Ambassador Disney Cine. The entrance was redecorated ‘Disneyland’ style. It always showed the latest Disney production or revival of Disney’s classic films. It closed in 1989.

Now part of the Marriot Hotel, we can still recognize the entrance with its small circular canopy, high up on the façade. The auditorium was still in use, sometimes for concerts during the jazz marathon, and mainly for conference facilities and meetings for the hotel. Sadly the main auditorium had been demolished by 2017. There is still a small space remaining which is used for conferences and the jazz marathon.

A vintage photograph of the Ambassador Disney Cine in the 1970’s:
View link

the canopy is still the same