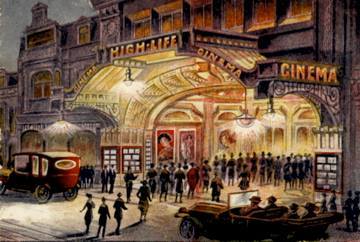 Not to be confused with the current Vendome Cinema (former Le Roy Cinema) located on Chaussee de Wavre. The original Vendome Cinema was in the Avenue Louise.

It opened in 1911 as High-Life Cinema, in 1929 it became briefly the Sapho Palace Cinema, before returning to the High-Life Cinema name until 1936. From 1936 until 1939 it became Studio Louise Cinema, then Vog Cinema, under the direction of Francois van Damme, who also owned the Cinemax Cinema in the centre and suburban cinemas in Anderlecht(Lido, Nova, Rio and Vaillance).

In 1952 it was over taken by Henri Fol who owned the Avenue Cinema and it was re-named Vendome Cinema, with an intelectual programming. In the 1960’s, Roger Vadim’s “Les Liaisons Dangereuses” played here. In 1965, the Vendome Cinema became a duplex, the second screen called again High-Life. In 1970. I saw “Woodstock” there. In the 1980’s it had finally 4-screens, the smallest was the known as Bar Fumoir. Operated under the direction of Peggy Heuze-Fol(Henry Fol’s daughter), she was obliged to close the Vendome Cinema in 1991. The Avenue Louise is made only for luxury busineses and could no longer support a cinema.

Lived in Brussels in 1979 minutes from the Vendome…Next to the more mass market Capitole, Avenue and Leroy this was more geared towards upscale French speaking audiences with several long runs including Philippe de Broca’s Le Cavaleur…But did see Norma Rae and Neil Simon’s California Suite here in English

The current Vendome is the ex Leroy which programmed Paramount, Universal and UA in its heyday