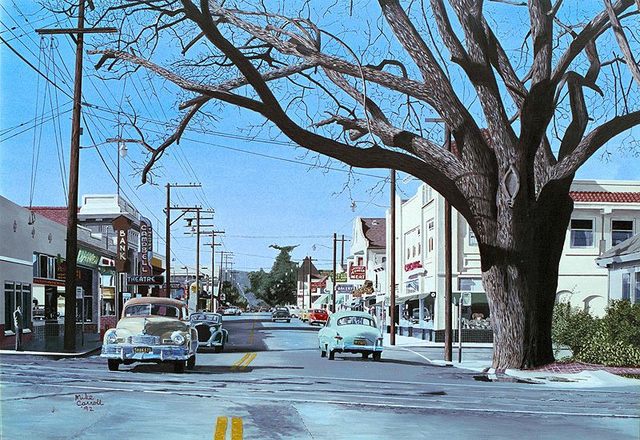 The front portion of this theater was originally a bank, built around the turn of the last century. The cream terra cotta facade with twin Doric columns was left untouched when, some years later, the rear of the building was extended and it became a movie theater for what was then the little agricultural community of Campbell, near San Jose.

By the late-1960’s, the nearby Plaza Twin Cinemas and UA Pruneyard Cinemas provided a lot of competition. The Campbell Theatre became the Gaslighter Theatre, presenting old time melodrama and small town style vaudeville. This has been its policy ever since. Audiences hiss the villain and cheer the hero, sing along with old songs, and are even allowed to throw popcorn!

The interior still had its balcony, and has long been decorated to look like a Ninteenth Century Old West Opera House, with the lobby done up as a saloon. Obvious relics from the house’s days as a movie theater included Moderne etched glass doors, and a small neon marquee and vertical sign.

It was reported in March 2009, that the Gaslighter Theater had been closed for several years, and the interior space had been gutted to be remodeled as a restaurant.

The building was first the Grower’s National Bank, built in 1922 and it remained a bank until the stock market crash in 1929. Ten years later in 1939 it opened as the Campbell Theatre, with the movie “Gone With the Wind”. It closed as a movie theatre in 1963.

It re-opened as the Gaslighter Theatre in 1967.

The Gaslighter has recently closed. I have heard it said that the space is to be turned into some kind of “ultralounge.” Apparently, requisite seismic upgrading is to be undertaken first.

I only went to one show at the Gaslighter, in Fall of 2000. It was my second date with my wife.

Here is a November 2001 article. Orchard City Theater should be an aka:
http://tinyurl.com/3dm6tc

For what it’s worth, the March, 1920, issue of The Architect & Engineer had this item, which might or might not have something to do with the origins of the Gaslighter Theatre’s building:[quote]“Bank to Erect Building

“Messrs. Wolfe and Higgins, Auzerais building, San Jose, are preparing plans for a bank building, stores and moving picture theatre, to be built at Campbell, near San Jose, for the Growers National Bank. Forty thousand dollars will be expended on the improvements.”[/quote]Perhaps only the part of the project that housed the bank was completed, or perhaps the original plans were discarded altogether and a different architect designed the building that was actually built. It’s a mystery someone from the area might be able to unravel.

As originally designed and opened in 1920, the Growers National Bank space was the tallest part of the development, in the center, with identical storefront wings on either side. The bank portion would eventually become the Campbell Theatre, but the ORCHARD CITY THEATRE was located, in 1920, in the left-hand wing of the complex, two doors down from the bank. Accompaniment to the silent movies was at first done with piano, either live or rolls, but in 1924, a Wurlitzer organ was installed. Today, the storefront wings survive, along with the bank/Campbell/Gaslighter Theatre portion. The left wing which once housed the Orchard City Theatre still sports its original white glazed brick facade, but the right wing wears a coat of smooth stucco, applied long ago. the one photo I have of the Orchard City (from the Jack Tillmany Collection) shows no marquee, just an indented ticket lobby, with poster cases and an octagonal box office.

There are a couple of books that describe the origins and history of the building. One is “Images of America: Campbell,” a photo-history compiled by the Campbell Historical Museum & Ainsley House, and the other is “Campbell: the Orchard City,” by Jeanette Watson, published in conjunction with the Campbell Museum Foundation. Both are available at the Campbell Historical Museum at 51 N. Central, and at the Carriage House of the historic Ainsley House at 300 Grant Street (on Orchard City Green.)

Official website & Facebook page below for LVL UP At the Gaslighter, the current arcade & bistro in the space.