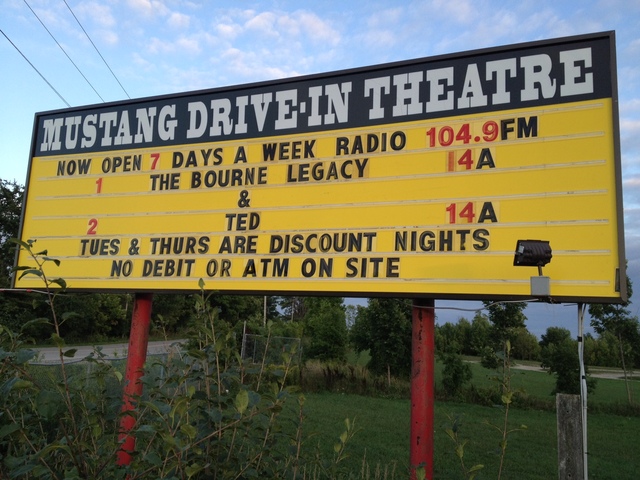 Opened around 1960, this drive-in is located just outside of Guelph, Ontario, on Jones Baseline just off Highway 7. It underwent renovation in around 2000.

Contributed by The Mustang Drive-In
Get Movie Tickets & Showtimes

You can see the video here

An article on the history of the Mustang, which started life as the JEM Drive-In, from the Kitchener Waterloo Record, March 12, 2010

Mustang got started as the JEM Drive-In

You drive east out of Guelph along Highway 7, then south on the Jones Baseline to get to the Mustang Drive-In Theatre, a big outdoor screen in the Township of Guelph-Eramosa that has been entertaining area residents for decades.

But it wasnâ€™t always called the Mustang.

Last weekâ€™s mystery photo, an old Guelph Mercury image, was snapped in 1962 when it was still known as the JEM Drive-In. Thereâ€™s a newer fence today and the sign, of course, is different, but the view from the entrance really hasnâ€™t changed a lot.

Glen Brydges wrote to say he remembers going to the JEM as a boy.

â€œBack in the early â€™60s my mother worked in the confectionary stand for the Jem Drive-In. My father would take us there to wait for her at times.

â€œWe would receive a colouring book and crayons from the booth at the entrance to keep us entertained while waiting for the movie to start. We spent time also playing on the swings in front of the giant screen. The only movie I can remember watching was Jason and the Argonauts. Simpler times.â€

John Tonin also went to the JEM as a young boy â€" and now enjoys taking his own children to the Mustang.

â€œWhen Iâ€™d go with my parents, Iâ€™d always fall asleep in the back seat,â€ he writes.

When he was a teenager, things changed.

â€œIn the late â€™60s and early â€™70s a whole gang us used to go to the all-nighters on summer long weekends. We werenâ€™t old enough to drive, so weâ€™d walk from the Victoria/Grange area. When we finally got there, weâ€™d sneak in through a small field just past the JEM sign.

â€œThat changed once we got our driverâ€™s licences. There were too many of us in the car so, inevitably, someone always ended up in the trunk and got in for free. (Back in the days when trunks could hold half your belongings!)â€

The name JEM, it turns out, comes from the family name of Charles (Chuck) Jemmett, who had the drive-in built in 1959, about the same time that the old Guelph Drive-In at Speedvale Avenue and Stevenson Street was torn down.

Jemmettâ€™s son Cliff, says his father was previously a CN express agent based in New Liskeard, Ont., but moved his family to Guelph to launch the JEM Drive-In. He had no movie theatre experience, but got some advice from a drive-in operator he knew in New Liskeard.

As teenagers, Cliff and his brothers helped out at the drive-in.

â€œWe were the guys who got to clean up the papers and the mess after the show and keep people from sneaking in,â€ recalls Cliff, who operates The Pet Pantry at 485 Silvercreek Parkway N., Guelph.

Sometime in the late 1960s, Charles Jemmett sold the JEM Drive-In to Premier Operating Corp. of Toronto and retired. Premier renamed it the Mustang and later sold it to Sunset Cinema Inc., which continues to operate it today.

The Jones Baseline â€" the road on which the Mustang is located â€" is of historical interest. It follows a line surveyor Augustus Jones mapped in 1792 while hiking through the wilderness from Burlington Bay at the west end of Lake Ontario to the Conestogo River near todayâ€™s village of Arthur.

Jones was a fascinating character who also had the job of surveying the land granted by the British Government to the Six Nations, six miles on either side of the Grand River, following the American War of Independence. A summary of his life appears in the Dictionary of Canadian Biography, available online at www.biographi.ca Itâ€™s also told in an article, Augustus Jones and the Jones Baseline, by Steve Thorning, which appears in Volume 8 of the annual reports of the Wellington County Historical Society.

The drive-in installed a Christie digital projector and began its new life as a digital venue on April 5th, 2013 with a double feature of OLYMPUS HAS FALLEN and THE CALL.

Is Bill Cardinell still doing the DIGITAL PROJECTION at the Guelph Drive-In??

In a 2014 article, the Waterloo Region Record cleared up the connection between the Guelph Drive-In and the Jem/Mustang. There wasn’t one.

“(T)he Guelph Drive-In Theatre … operated for more than 10 years on the north side of Speedvale, just east of Stevenson Street. It was cleared by owner A.I. (Al) Rosenberg of Kitchener in about 1958 to make way for a shopping plaza”.

… “(Rosenberg) also invested in several drive-in theatres, including the Parkway Drive-In in south Kitchener and the Sunset Drive-In outside Preston.”

… “The closing of the Guelph Drive-In created a business opportunity elsewhere. In 1959 Charles Jemmett built the JEM Drive-In on land south of Highway 7 to the east of Guelph.”