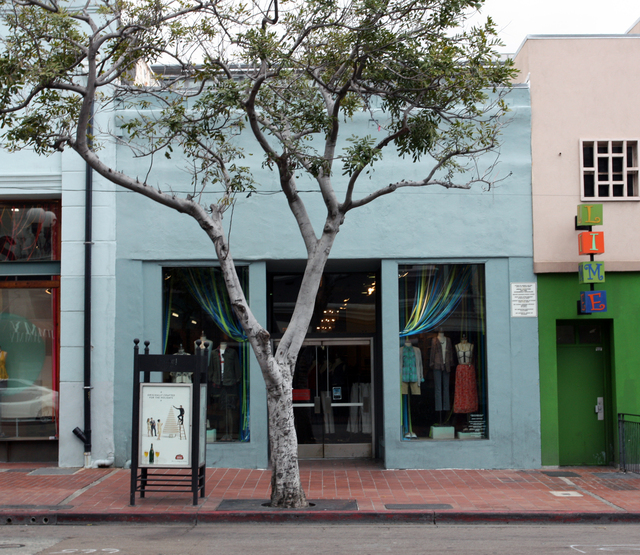 In 2009, a gift store operates from the building.

When I worked at the Aztec in the late 60s, this space was used as a card room. Mostly older men playing poker. It was never a traditional theatre. As I recall, the space was fairly small, so I doubt that there were more than 100 seats or so. Maybe someone out there knows for sure.

Believe it or not, I worked at the Foxy Theatre for a year in the mid-90s. I could write a novel about my time there. I’m pretty sure it opened in the late 70s as mentioned above and still operated until somewhere around 2000, give or take a few years. At the time (I was 21yrs old) it was a pretty good job, you were paid cash at the end of the night. One thing though was your schedule often flipflopped between Noon and Graveyard shifts every other day. Since I was an artist/musician I kept weird hours anyway and didn’t mind at first. It was also owned by a gay couple although it was a “straight” theater, so a lot of “casual encounters” were going on. Mostly closeted types who were married and led “normal lives”. Although one of my duties was to break up these activities for obvious reasons (cops could come in at any time which they did often) but it wasn’t looked down on or stopped either so it was fairly regular. There was a Main Theatre behind the pay-booth, I would guess between 80-120 seats. The walls were painted black except for a big white rectangle for the video projector, maybe 7' high by 12' wide or so. A hall led to the back where the utility rooms, restrooms and Rear Theatre was. This was a little seedier. It was probably only a 12'x12' room with folding chairs, I cant remember exactly, but the video was on one of those old 80s home movie theater TVs with a wide screen. It was really cramped and gross in there, maybe 20 seats and played more than the usual porn of the time. Yeah, the smell was pungent, like decades of filth doused in industrial cleaner on wood floors which probably absorbed more than it removed. The projectors were VHS though so when I’d get bored I’d play weird art videos at 5 in the morning, no one ever complained. I moved out of SD a few years after that but last I saw it was an Ice Cream shop, I want to say this was 2001 or so. I had to laugh to myself over that, if they had any idea…..