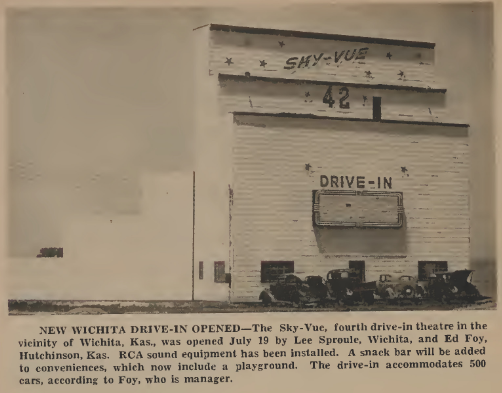 More posts are needed. I can’t help with the location. As far I know, I was only there once. 400 cars does not seem right. It seemed quite small, maybe 100 cars tops. I saw a Star Trek movie there. I believe it was Star Trek 2, which dates to 1981. But by this time, this drive in was one of the last in town aned was showing second run movies. Someone with more knowledge as to the location could help but I believe as with so many former drive ins, the location has been built on and so is not recognizable.

Its proximity to Kansas State Highway 42 aka K-42.

BoxOffice reported on Feb. 8, 1960 that among the folks in Kansas City booking films was “George Sproule of the 42 Sky-Vue Drive-In, Wichita”.

Later on the same page, it continued, “George Sproule kindly passed along word of the recent death in Houston, Tex., of Edwin G. Foy, formerly an owner of the Sky-Vue Drive-In at Wichita. Sproule, who now owns and operated the outdoor theatre under the name 42 Sky-Vue, adds that Foy operated this situation about seven years before Sproule bought him out in 1954.”

John Winfrey designed the K-42 Drive-In for Sullivan Independent Theatres Circuit. The venue closed for the season on September 22, 1986 with a triple feature of “Aliens,” “SpaceCamp,” and “Big Trouble in Little China.” It didn’t reopen and was razed for an industrial site.