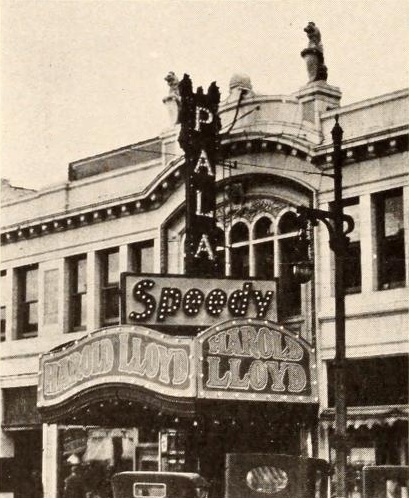 Wichita’s Palace Theatre opened on January 17, 1916 with Frank Keenan in “The Coward” & Roscoe Arbuckle in “Fickle Fatty’s Fall”. It was operated by Southwest Amusement Circuit. It was equipped with an Austin organ which was opened by organist P. Hans Flath. In 1929 it was operated by Fox Midwest Amusement Corp. From 1953 it was operated by Sullivan Independent Theatres. The Palace Theatre was closed on April 27, 1963 with Marlon Brando in “Mutiny on the Bounty”. It was demolished in 1966 and replaced by a parking lot.

The Palace Theater opened January 17, 1916 with “The Coward,” a Civil War drama and “Fickle Fannie’s Fall,” a comedy. It was Lewis Miller’s second Wichita theater. The Princess Theater was his first and the Miller Theatre was his third. At the time of its opening the Palace was the biggest theater to open in Wichita. The Palace closed in 1961 and was razed 5 years later. It is now a parking lot.

An ad for Carl Boller & Bro. Architects, in the January 16, 1916 issue of The Wichita Daily Eagle boasted that the firm designed not only the new Palace Theatre but the Crawford and Princess Theatres as well. 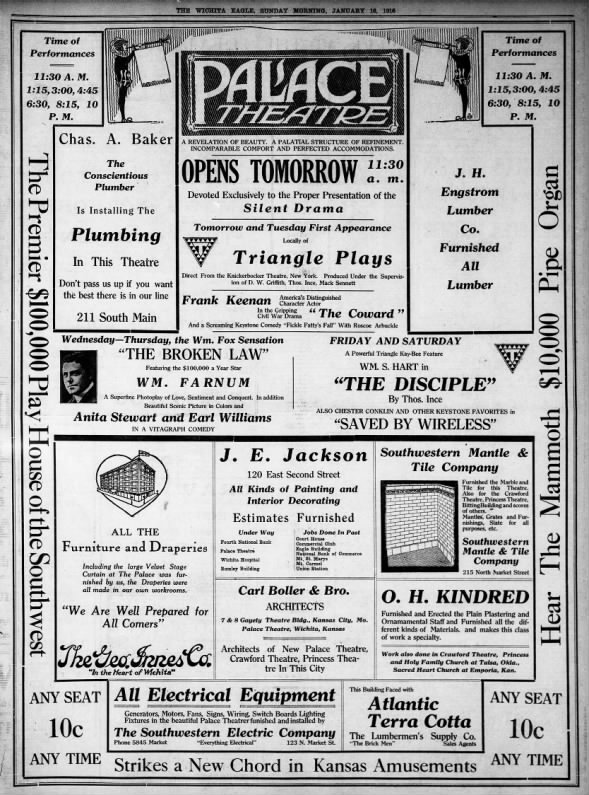 The Exhibitor, June 3, 1953: “O. F. Sullivan, general manager, Sullivan Independent Theatres, announced that he and his wife, Mrs. O. F. Sullivan, had completed a deal with Fox Midwest for the Palace, Wichita, Kans. The theatre closed for three days for refurbishing, and reopened under the new management. The Palace makes the eighth theatre in Wichita acquired by Mr. and Mrs. Sullivan, who came there 28 years ago, and opened the West, first and only suburban theatre in that city at that time. The Palace will be under the management of Phil Silvernail under the supervision of Leonard Kane in his capacity as city manager. Kane has been with Sullivan Theatres for over 20 years, and Mrs. O. F. Sullivan is now secretary-treasurer of the circuit. Sullivan also operates several theatres outside of Wichita, Kans., and is one of the pioneer drive-in builders in Oklahoma. He has always been active in exhibitor organization circles, and helped form Allied Independent Theatre Owners of Kansas and Missouri in 1948. He was president of this Allied unit for three years, and was a member of the national beard of directors of Allied States Association for four years.”

The Exhibitor, Jan. 27, 1954: “It was announced by O. F. Sullivan, general manager, Sullivan Independent Theatres, Wichita, Kans., that operation of his Wichita theatres will be transferred to Consolidated Agencies, Kansas City, which is a buying, booking, and theatre management corporation. A sale, lease, and “option to purchase” agreement was completed, after two years of negotiation, with Nu-Vu Theatres, Inc., and a subsidiary corporation, Multi-Scope Theatres, Inc. C. A. Schultz, president, purchasing and leasing corporation, is also president. Consolidated Agencies, the corporation which will be actively operating the theatres. The theatres will continue to operate under the banner of Sullivan Independent Theatres, at least until after the “option to purchase” is exercised. Nick Sonday will assume the duties of general manager for this group of theatres, while Leonard Kane, associated in Wichita with Sullivan Theatres for over 20 years, will remain in the capacity of city manager. The complete theatre’s sale and lease and option agreement was handled by W. F. Brasch and Company. Sullivan Independent Theatres consists of eight Wichita theatres, the Crest, Palace, Crawford, Civic, Tower, West, 54 Drive-In, and 81 Drive-In, acquired by Mr. and Mrs. Sullivan over a period of 28 years. Sullivan was largely responsible for the forming of the Allied Independent Theatre Owners organization of Kansas and Missouri and was president for three years, 1948-1950.”

The two sentence entry above as submitted by Cactus Jack notes that the Palace was open in 1957 and had been closed in 1958. For more detailed history of the Palace, it is provided below:

The Palace Theater opened on a ten-year lease by Southwest Amusement Circuit on January 17, 1916 with Frank Keenan in “The Crowd" supported by Fatty Arbuckle in “Fatty’s Fickle Fall.” P. Hans Flath was at the $10,000 pipe organ that night. It was the Boller Brothers. design that set the theater apart in the first generation of movie theaters with their creative use of terra cotta, stained glass windows, and great quantities of marble. It was organist Flath who would become a star over the next five plus years at the keyboard. Flath would move to the new Miller Theatre playing its mighty Wurlitzer pipe organ. The Palace hire Don Williams as his replacement. Southwest Amusement would re-up the lease for an eye-popping $500,000 over 20 years in 1925.

Southwest Amusement and “Doc” Miller operated the downtown movie palaces including his Miller, the Palace and the Wichita until selling his entire 50-theater Midwest Theatre Company to Fox Theatres in 1929. Likely, the cost of transitioning to sound was a challenge although The Palace had the distinction under Midwest and Miller of having been the first Wichita theater to wire for sound on May 14, 1928 with the film, “When a Man Loves” and short subjects. (Note: though the film was without dialogue, the film was the third Warner Bros. feature with a pre-recoded disc soundtrack.)

The Palace’s pipe organ - presumably an Austin Organ Co. make - was de-installed and donated to Friends University in 1938 during a streamline makeover. The Palace Theatre was known as “the House of Hits” and Fox Midwest re-upped for a final 20-year lease in 1945. Fox ran the venue until selling it to Sullivan Independent Theatres in 1953. Sullivan converted the Palace to widescreen for presentation of CinemaScope titles in 1954.

The Palace closed in style with “Mutiny on the Bounty” on April 27, 1963 following a road show engagement. Competition from suburban theaters with free parking and drive-in theaters led to its closure. Sullivan carried on with the downtown Crest until selling it to Commonwealth in December of 1963 after almost 40 years of theatrical operations in Wichita. The Palace reached expiry of lease as a vacant building in 1965 eyed as the City tried to go through urban renewal in its central business district. The Palace was razed in a botched demolition job in 1966 with the walls prematurely collapsing - although there were no injuries. It was replaced by a parking lot.