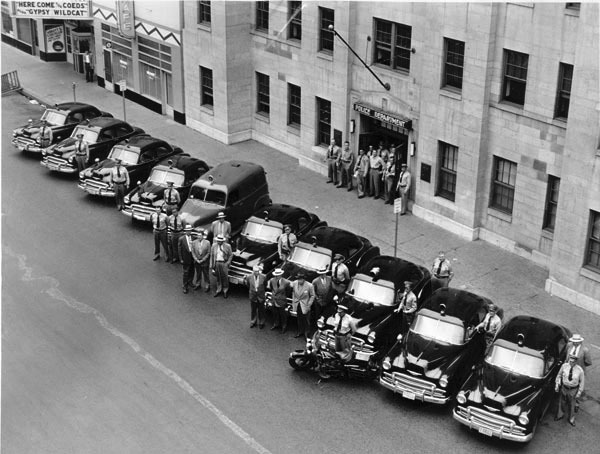 The Sandra Theatre was opened on July 23, 1939 with Barbara Hunt in “Wings of the Navy”. By 1942 was operated by Fox Midwest Amusement Corp. It was closed on February 3, 1954 with Charlton Heston in “The Greatest Show on Earth”.

Since demolished, a parking garage was built on the site.

This interesting link list the Sandra, along with photos of many other historic Kansas theatres,
View link

The Sandra Theatre opened on July 23, 1939. A few months later a photo of its front appeared in the November 11 issue of Boxoffice. The theater was designed by one of Wichita’s leading architects of the period, Lorentz Schmidt, who was better known for designing many schools throughout Kansas. The Sandra was probably his only commercial theater design, though he undoubtedly had much practice with school auditoriums.

The Sandra Theatre was built for husband and wife T.H. and Merta Slothower, who operated it until 1942 and then leased it to Fox, according to and article about the Slothowers in Boxoffice of March 29, 1952. The April 1, 1950, issue of Boxoffice called this the Fox Sandra Theatre, and said that it was switching to an art film policy. It was seldom mentioned in Boxoffice after that, though the Slothowers were mentioned frequently, operating several theaters in the region into the 1970s.

Linkrot repair: The photo of the Sandra Theatre in the July 23, 1939, issue of Boxoffice is now at this link. It’s small and rather blurry, but shows the lighted sign and tower all the way to its top.

Here is a photo of the Sandra.

The Sandra photo is located on Facebook and a password is required to view it. Possibly you could upload the photo to Cinema Treasures.

Mr. and Mrs. T.H. Slothower’s Sandra Theatre launched July 23, 1939 with Barbara Hunt in “Wings of the Navy” supported by three selected shorts. Midwest Theatres took on the operation moving it to “move-over” status taking older product from the Orpheum or Miller theaters. The circuit closed it on February 3, 1954 citing an inability to properly convert to widescreen to show CinemaScope films. It closed with “The Greatest Show on Earth.” The local newspaper moved into the former theatre after some remodeling in 1954.