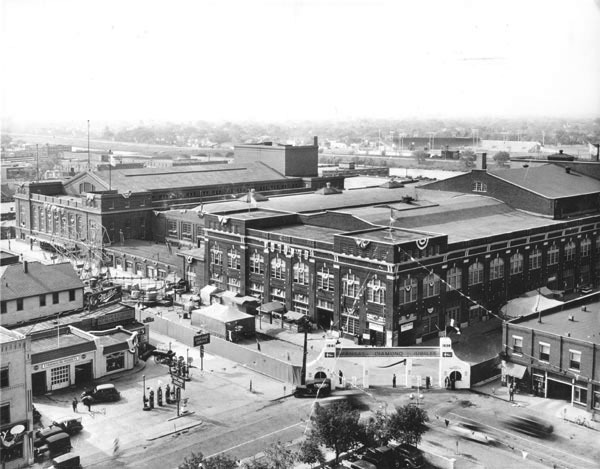 The 2,500-seat Arcadia Grove Theatre opened on September 29, 1919. It was a rooftop theatre and in 1920 it was reworked to become a 1,931-seat New Arcadia Theatre operating as a live performance venue, attracting many top star names.

Many classic Kansas theatres are mentioned, along with photos, on this link -
View link

The entirety of the entry above reads, “Opened in 1918, not much else is known about the Arcadia Theatre. Please share any information you may have on this movie house.” Here are some details about the live events-centric Arcadia Theatre that opened in 1919 though not as a movie house and from my research (though one could create a day-by-day of the Arcadia’s history as there appears to be nothing unknown about it):

The Arcadia Theatre opened in its first iteration as the 2,500-seat Arcadia Grove Theatre on September 29, 1919 in time for the annual Wheat Show Exposition in Wichita’s new Exposition Building. Pictures show the spectacular rooftop garden theater as arguably one of the prettiest venues of its type in the United States. Simply amazing. Apparently architect Lorenz Schmidt was behind the original Arcadia and the new $1 million Exposition Building first conceptualized in 1917 as an annex to the cavernous Forum which was built in 1910. The Arcadia Grove was located at 201 South Water Street and was on the building’s second floor next to the Forum and the new Rose Room ballroom.

But the problems and complaints from patrons of the Arcadia Grove were so pronounced during the 1920 Expo that events were moved or cancelled. So - though beautiful - the rooftop concept was totally reworked as the New Arcadia Theater, a 1,931 seat venue which was used as a smaller venue to the 4,000 seat Forum. The New Arcadia launched as a live venue on September 26, 1921 just in time for the

The Arcadia was a live event venue that had an almost unfathomable run operating from 1921 to 1965. Appearing there live were Nelson Eddy, Duke Ellington, Spike Jones, Ethel Barrymore, Ed Wynn, et al. When Eddy performed next to a circus going on at the Forum, lions' roars were quite audible. Eddy. quite the sport, sang louder claiming that he could be more vociferous than any animal in the kingdom. The swan song for the Arcadia was a live performance of “Spoon River” on February 27, 1965. It was used as a polling place in April of 1965.

A demolition crew came in to prep the venue for razing at which time the balcony completely collapsed cracking the foundation pillars and buckling the Arcadia’s main floor. Having occurred just months after its final capacity show, a local reporter asked whether the demolition crew’s intentions to make the cave-in happen or if it was the building’s poor condition that led to the collapse. Not putting anyone’s minds at ease, the demolition said that the collapse would have occurred at one of the next shows with any capacity or swaying in the balcony. So it was a situation where the demolition of the landmark theater was fortuitous.