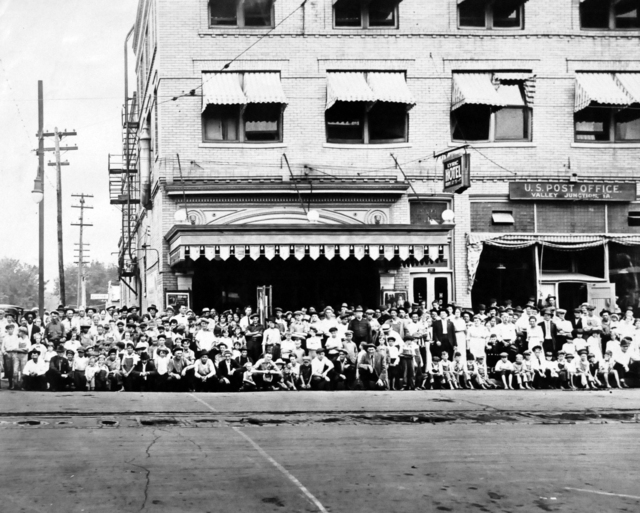 The Lyric Theatre was housed in a three-story brick/masonry commercial building located on the southeast corner of 5th Street and Maple Street in the historic "Valley Junction" district of West Des Moines, Iowa. It was built in 1905. It was opened July 22, 1907.

The Lyric Theatre is listed in the 1950 edition of Film Daily Yearbook with a seating capacity for 350. It has since become the retail "Theatrical Shop", specializing in theatrical apparel and novelties.

Opened on July 22, 1907 and had motion pictures from the outset as part of the vaudeville show mix using Powers' Cameragraph. The Lyric made the transition to sound. In 1954, it was equipped for CinemaScope. But at that point, the theatre struggled mightily in the television age trying to stay relevant.

Operators changed frequently in the TV era from John Graham who installed CinemaScope to Earl Manbeck Jr. and John Doud who came on in 1959 and closed up shop to Paul Henning who re-opened the theater in 1961 to James Harding and Ronald Noyes who took over for Henning to Herbert McCraw to Joseph Stone and Steve Cervi in 1964 to Glenn Mallory — the apparent final operator.

As the theater approached its 60th anniversary in 1967, the Lyric was showing Adult films. Police seized the double feature adult films of “The Uninvited” and “Daniella by Night.” The city stripped Mallory of his license. The next ads for the theater bill it as a costume shop located in “the old Lyric Theatre” likely making adult films under the management of Glenn Mallory as the Lyric’s swansong.