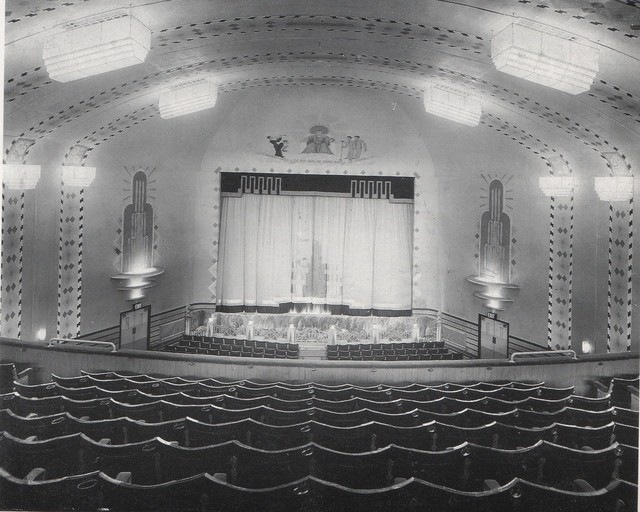 The Apollo Super Cinema was built for and operated by the independent Tyne Picture Houses Ltd. Located in the Byker district of the city, it opened on 28th December 1933. Designed by architect Pascal Joseph Stienlet, seating was provided for 1,650 in stalls and circle levels, and there were waiting rooms that could accomodate 1,000 patrons. The interior decoration was designed by R.J. Richardson of Newcastle. A series of bands across the ceiling represented sprockets in a strip of film, and there were fountain-like decorative lighting features each side of the proscenium. Above the proscenium was a painted mural depicting singers and a musician. There was a free car park at the rear, and in April 1935, an 18-table billiard hall was added to the building.

The Apollo Cinema was seriously damaged by German bombs on 6th May 1941, the cinema had just closed for the night, so the building was empty. Its remains were boarded up for over 14 years. The billiard hall remained open until after the war, when it became a soft furnishing factory and later a clothing factory. In 1955, planning permission was granted to rebuild the Apollo Cinema to its original design, using the same architectural firm of Pascal J. Stienlet & Son (Vincente Stienlet). The new Apollo Cinema opened on 19th March 1956 with Alastair Sim in “Geordie”. It had 1,576 seats (936 in the stalls and 640 in the circle). Interior decoration similar to the previous scheme was by M. Alexander & Son of Newcastle.

The Apollo Cinema was closed on 17th September 1962 and was converted into a bingo club. However the projection equipment was retained and maintained. It re-opened as a cinema under the management of Arnold Sheckman’s Essoldo circuit in June 1964 with Jerry Lewis in "The Nutty Professor".

Purchased by the Classic Cinemas Ltd. chain in January 1972, it was closed on 1st October 1972 for conversion into a 3-screen Apollo Entertainment Centre. Cinema 1 in the former circle seated 534, and opened on 30th December 1972 with "Mary, Queen of Scots". Cinemas 2 & 3 in the former stalls seated 180 & 169. On 5th February 1973, a fourth screen seating 87, was added in space that was originally one of the cinema’s waiting areas. This opened as the Tatler Cinema Club, screening uncensored sex films. It soon reverted to regular programming, and then became a skateboard centre, before closing by 1980. The remaining 3-screens in the Apollo Entertainment Centre closed on 1st October 1983, with "Friday 13th Part III" showing in Cinema 1.

The building was empty and for sale, until September 1989, when it became a car maintenence centre named Autospray. A feature of the building was the rear end of a red mini car protruding from the facade. The building was demolished in December 2001 and a Morrison’s supermarket was built on the site.

I spent many happy hours in the Apollo as a child and teenager and I remember the Apollo before and after tripling. Went to the Saturday morning kids club and remember dancing on the original stage. I was lucky enough to see behind the scenes several times and after tripling it was still possible to see the original front stalls and proscenium hidden behind the false walls. I went to watch the last film on the last Sunday night before closure for old times sake, a double bill featuring Friday 13th Pt lll with My Bloody Valentine in screen 1.

I was a projectionist at the Apollo from 1974 until it’s closure in 1983.The chief projectionist was the late Mannie Moorhouse.We were both on duty for the final screenings.Friday 13th Part Three as you say in screen 1…I wish I could remember what was showing in cinemas 2 and 3 but time has eroded the memory.But it was a sad day…Mannie had been there since the 50’s,even during the ‘Bingo’ years.I will try and add some photos if possible.

I attended the cinema just once, on Wednesday 11th August 1982 while on holiday in the area. That day, I saw a double-bill of ‘The Beyond’ and ‘Shock’ (I haven’t seen either of these on TV since then!)

Remember going to see my favourite war movie, “where eagles dare” around late seventies, in one of the smaller screens, presentation was terrible, the picture was dark, the sound was weak… Im sure Mannie wasnt on that day……