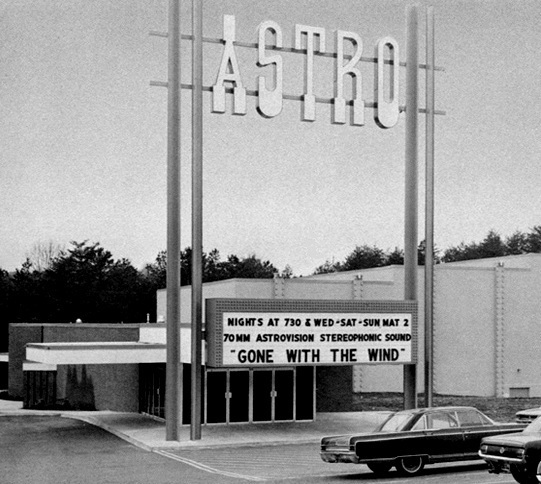 The original 700-seat Astro Theatre opened in Greenville, SC on December 22, 1967 with a 70mm reissue of “Gone With the Wind”. Built by visionary entrepreneur Heyward Morgan, the Astro Theatre featured space-age decor with vaulted ceilings embedded with twinkling stars and a lunar relief.

Despite objections that no location could sustain more than one screen, Morgan added the Astro II in approximately 1969; the combined auditoriums seated over 1,000 patrons, and were later joined by a sister theater, the Astro III in Clemson, South Carolina.

Astro I premiered many 70mm releases and, during the early-1970’s, was the only theater in Upstate South Carolina where could be seen such releases as “Patton-Lust for Glory”, “Deliverance”, “The Godfather”, “The Exorcist” and “Jaws”; boxoffice sellouts were common weekend occurences. The world premier of Burt Lancaster’s “The Midnight Man”, filmed in Clemson SC, was held at the Astro Theatre in 1974.

The jewel in the South Carolina crown of Martin Theatres of Georgia for some two decades, the Astro Twin closed its doors in the late-1980’s, overtaken by the modern tide of multiplexes. The last film definitely known to have shown in the Number One auditorium was “Star Trek IV, The Voyage Home” (this is anecdotal and may not be conclusive).

I spoke too soon. I was in Greenville over the weekend and this place has been demolished. You can still see it on Bing, for whatever it’s worth.

I remember going to the Astro in Greenville during the late 70’s.. they showed STAR WARS on teusdays for a buck per person for a while. My friends and I made a habit of it. It’s great to discover
this web site for people who cherish the theater and the memories.

The Astro Twin’s engagement of Star Wars lasted 22 weeks. An impressive run for a city the size of Greenville.

Midnight Man premiered at three different theaters on the same evening. Early evening it premiered at the Osteen in Anderson (near where portions of the film were shot) and the Astro III in Clemson. Co-producer Roland Kibbee and female lead Susan Clark were on hand for the Clemson premiere. There was but one screening that evening. Following the opening credits in Clemson, Kibbee and Clark traveled to Greenville, for the premiere held at the Astro I later that evening. Burt Lancaster was at neither that evening.

Wow,no Burt,By that time sadly,Lancaster was working to pay bills,Still love the one sheet,thanks for the update on Lancaster. I think if you watch,“EXECUTIVE ACTION” Burt is wearing a Clemson Tiger Hat.Bet he got while in Carolina.

JimPoole mentioned seeing “Star Wars” there. I was home from a four-year tour of duty overseas in the late summer of 1977. I saw “Star Wars” there, too. Wasn’t very impressed, mainly because the sound wasn’t good. A month later, I was in Washington DC. Took one more chance on “Star Wars” and saw it in 70mm and Dolby sound. BLEW ME AWAY. It should have done that at the Astro, but for some reason, they didn’t have Dolby sound.

I worked at this theater as a projectionist in 1986 when I was 16. It was awesome. I remember the managers name was “Vic”. There was rumor that the place was haunted by the ghost of a former employee that died there of a heart attack many years before. I heard a couple stories about what they saw but never saw anything myself. I feel so lucky to have worked there and got to see some 80’s classics like: Ferris Buellers Day Off, Labyrinth, Friday the 13th, and Short Circuit. Occasionally, I would host secret parties at the theater. On a Friday or Saturday night, I would leave one door unlocked after I closed up. Then I would return about 2:00 am with beer coolers and loads of my friends from Greenville High School. We would pile into the theater and play our favorite music over the theaters booming sound system while I threaded up the projector to play a movie for us. So much fun! I eventually got caught and fired but it was worth it!

I forgot to mention that I visited Greenville many many years after I moved away. I drove by the theater to see it in the middle of a renovation! There were lots of workers inside converting it into a club. I walked in and it was sad to see those beautiful red curtains being taken down and all the seats being ripped out.

Then a few years later when I visited Greenville again, I drove by and saw a wrecking crew tearing the whole building down!!

oh well, I will always remember the movies, the parties, and me, Heather and Elizabeth going out on the roof without permission :)

I covered that story when Universal was shooting Midnight Man in Clemson – still got my one sheet too. I did see the GWTW reissue, BULLITT and many others at the Astros. One of my memorable moments while covering the opening of LAST TANGO IN PARIS was that they emptied the theater due to a bomb threat. BJU had been outside protesting the X-rated opening that day.

This opened with one screen on December 22nd, 1967 and as the state’s first twin theatre on July 2nd, 1969. Both grand opening ad as well as some pictures are in the photo section.