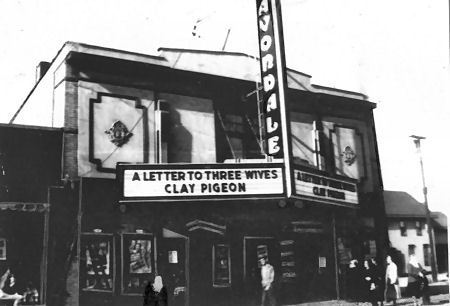 too bad no one took a picture of the outside. It was still standing in the 1970’s.

I think it has been razed. The pizza place is at 354, then there is a vacant lot on the corner of Oliver & Robinson where the theater would have been.

I can remember driving by the theater in the 1970’s and hearing loud rock music coming from the theater. Maybe a group was practicing there. I remember looking at the front of the theater and thinking how fancy the doors where. They were like crescent shaped glass in the doors.

Here are several photos of the Avondale Theater http://www.nthistorymuseum.org/Collections/assemblyofgod.html

During the 80’s this theatre was used for concerts.

The Oliver Theatre, operated by Henry Klinger, was the subject of an article in the December 4, 1912, issue of Tonawanda’s local paper, The Evening News Klinger had received a rebate on the taxes for the theater after claiming that the assessment for the year 1911 had been erroneous.

Klinger operated the house until at lest 1915, when he became the first person to exhibit movies on Sunday in North Tonawanda, according to an item in the August 21 issue of The Moving Picture World. He later sold the house to Snyder and Zimmerman of Buffalo, but repurchased it from them in July, 1921, when the July 21 issue of The New York Clipper reported that he planned to remodel the theater and increase its seating capacity.

In January, 1922, The American Organist reported that the Avondale Theatre in North Tonawanda had anew Wurlitzer organ. No details about the instrument were given.