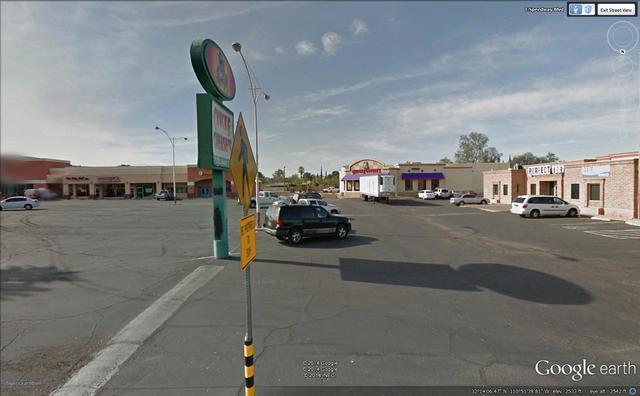 In 2009, it was a Chuck E Cheese’s restaurant, playground and amusement area, which relocated across the road in 2014. The former theatre building is now vacant.

Right now, they’re building a new Chuck E. Cheese’s across the street at 6125 East Speedway Boulevard. I hope they save the old building, restore it, and reopen it as a performing arts venue.

This was originally operated by The Cineworld Corporation Of California, then TM Theatres, & finally AMC Theatres.

Here’s an ad from the TM Theatres era:http://webcache.googleusercontent.com/search?q=cache:1FWV8DhhPfsJ:newspaperarchive.com/us/arizona/tucson/tucson-citizen/1977/07-18/page-14+&cd=3&hl=en&ct=clnk&gl=ca&lr=lang_en

Mid-century modern architecture specialist Ann Rysdale, pioneering female architect as Arizona’s only licensed female architect from the 1940s to the 1960s, designed Cineworld. She designed more than 400 projects in greater Tucson area. The 1,000 seat facility cost $350,000 and had four equal 250-seat auditoria. The theatre was automated which was a good thing as the it had four double features at its opening. After Cineworld Corp. of California, the theatre was operated by TM Theatre Circuit which launched the Oracle in 1976.

I have been to the new Chuck E. Cheese location and the old one still sits there empty.

The TM Theaters Co. was owned by a Mr. Weiner from Kansas City. It was named after his wife’s cat Timmy!. I worked there from 1972 to 1976. He also opened a similar multiplex on Oracle Road here in Tucson. I also worked there for a little while to assist in getting it opened and train the staff. He hired college students for the ushers.The Cineworld was the first “multiplex” in Tucson and we had tickets for $1.00 around 6pm-7pm. We packed the house. Because we were the first multiplex we had to enforce which theater you went into as different movie companies needed to get their profits. Now nobody cares if you switch theaters!

In response to dallasmovietheaters comment. Great information but when I was there in the 1970’s there was no automation of the projectors. There was a projectionist on duty. His name was Paul Turnball.