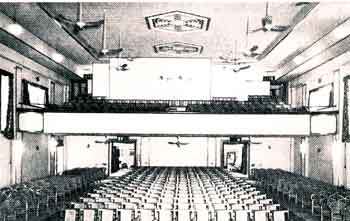 The China Fleet Club is a club looked after the needs of the Men of the Fleet in Hong Kong. Its predecessor was the Royal Naval Canteen.

According to articles posted on the web site of "Royal Australian The Gun Plot", the theatre was engaged for long periods by the H.K.Amateur Dramatic Club, the Hong Kong Philharmonic Society, and the Hong Kong Singers. It was also extensively used for Ships Concerts, Military Concerts, dances organised by the Fleet and also by the Cheerio Club of Hong Kong. Boxing contests were also held in the winter.

Before the outbreak of war, the theatre was also used as a lecture hall by the Hong Kong Government. Whether movies were shown at the theatre in the 1930’s was unknown. Tombola was a great favourite among the Men of the Fleet, and it was played at the theatre three evenings a week. The Club took a 10% of
the takings.

The 500-seat auditorium had stalls and balcony, with overhanging electric fans for ventilation. During the war years, the China Fleet Club was expropriated by the Japanese Armies as its Navy Headquarter.

After the end of WWII, the China Fleet Club was under extensive refurbishment, and the theatre re-opened in October. Films were shown at the theatre, and the admission fee was 50 cents. Its advertisements published by the China Mail said that "Men of the Allied Navies, Royal Marines, Fleet Auxillaries visit your own theatre at the China Fleet Club."

The films shown at the theatre were reportedly uncensored by the Hong Kong Government. In the mid-1960’s, the theatre was closed down and completely gutted. A new floor was built, and an eight-lane bowling alley was installed on the ground floor and an air-conditioned
dance-cum-tombola hall on the upper floor.
The building of the China Fleet Club was
rebuilt in the early-1980’s, and the new club building known as the Fleet House was opened by H.E.Sir Edward Youde,G.C.M.E.,M.B.E. the Governor of Hong Kong on 31st May, 1985. The Club, which occupied the first nine floors of the Fleet House, had a multi-purpose air-conditioned auditorium. Besides the perennial Millie’s Music Hall and plays by local drama groups, the Club attracted performers from around the world. Among the artists performed at the auditorium including The Searchers, The Supremes, The Stylistics, Gerry and the Peacemakers, The Drifters etc.
The last event to be held in the auditorium was a Grand Tombola Evening on Sunday of 29th November, 1992.

Sammy40,I don’t think the Chinese name is a correct one.